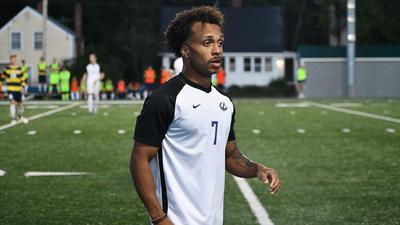 John-John Dickenson scored two goals against the University of New England in his college debut—sending MMA to a 2-1 win.

Freshman John-John Dickenson made an immediate impact on the Mariners men’s soccer team, scoring two goals in his college debut to lead Maine Maritime Academy to a 2-1 victory over the University of New England, according to a press release.

Dickenson set the tone early for the Mariners, scoring his first collegiate goal, assisted by Daniel Chizmar, after being on the field for only six minutes. University of New England responded before the half was over with a goal of their own, tying the match 1-1 heading into halftime. After a tight battle in the second half, Trevor Gray sent a long ball up the field to Dickenson, who found the back of the net on his second goal of the night, sending the Mariners to a 2-1 victory.

The Mariners improve to 1-0, while the Nor’easters fall to 0-1. The next home game is versus Bates College on Tuesday, September 6, at 7:30 p.m.

The Mariners scored the only goal in the first half, when White found the low left back of the net. Colby-Sawyer answered 10 minutes into the second half when Kara Keiper scored a goal to tie the game up with ones. After a scoreless 10 minutes, Bern put one past the Chargers to regain the lead. Quickly after, Colby Sawyer sent one to the back of the net as the game came back to a knot. Neither team could put the game away, ending in a 2-2 tie after regulation.

The team’s next home game is against Bates College on Tuesday, September 6, at 5 p.m.