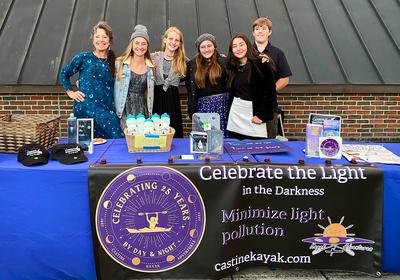 On the evening of September 23, Maine Maritime Academy hosted a gala featuring the premiere screening of the short film GalaxSea: A Voyage into the Bioluminescent Night, a sci-fi-inspired adventure documentary filmed in Castine and starring Castine resident Nora Spratt.

A team of people came together to bring the film into existence and to create an appropriate venue for the film’s premiere on MMA’s waterfront. Itzel-Marine Gourmelon, who created and directed GalaxSea, and Jessica Shively, Assistant Director of Student Activities at MMA, worked together beginning last October and involved many other interested and creative people in making plans for the gala.

Everyone worked together to give the film premiere, as Gourmelon desired, an appropriate venue involving the sea and the night sky and to create, as Shively stated, “the opportunity for MMA students to connect with faculty/staff and community in a unique way.”

Shively further said that the use of the roof of Payson Hall and lower level “theater” area of MMA’s waterfront coincided well with the movie theme and MMA’s desire “to invite the community to join us ‘where the sea meets the stars.’”

Besides the screening of the film, the evening included a social time showcasing live band performances by MMA Jazz Club and Boston-based Indie band, Hush Club, food catered by Sodexho, a cash bar. Community tables invited by Gourmelon represented the International Dark Sky Association, the GalaxSea film crew (who ran a silent auction to raise money to take the film to film festivals), Castine Kayak Adventures (instrumental in the inspiration and completion of the film), the Bagaduce Watershed Association and the schooner Bowdoin crew. MMA students and staff ran a raffle of Moon Lamp centerpieces and orchestrated the student photo exhibition.

GalaxSea: A Voyage into the Bioluminescent Night invited its audience of approximately 300 people to embrace darkness and connect with the wonderful world of bioluminescent sea creatures and the star-studded night.

In order to do so, however, individuals and communities must become aware that light pollution caused by overuse of artificial light is becoming a serious problem and that we can protect the night sky by adopting doable environmentally responsible outdoor lighting practices as summed up by Castine Kayak Adventures’ Karen Francoeur: “Turn out your outside lights!”

GALLERY — GalaxSea: A Voyage into the Bioluminescent Night 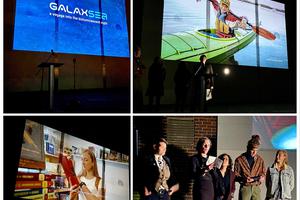 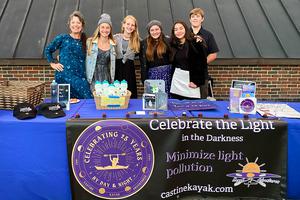