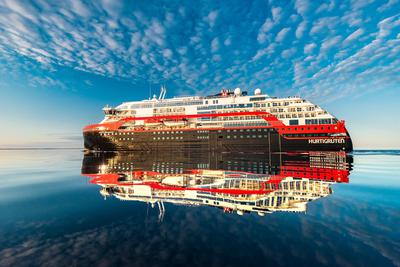 The original plan for the Norwegian hybrid cruise ship, the MS Roald Amundsen, to anchor in Castine later this month has been scrapped

The hybrid cruise ship that was in talks to drop anchor in Castine for one night later this month has removed Castine from its itinerary as of September 13. The MS Roald Amundsen, part of a fleet of ships owned and operated by the Norwegian company Hurtigruten, embarks from Halifax, Nova Scotia, on September 17 for an eight-day trip that includes Maine stops in Eastport, Bar Harbor and Rockland before reaching its final destination of Boston.

“I knew it was an evolving situation,” said Cruise Maine Executive Director Sarah Flink, in an email about the Castine cancellation, which she later confirmed.

“We were very much looking forward to this—it was actually one of the highlights of our voyage,” said Chelsea Claus, expedition voyage planner for Hurtigruten. “Unfortunately we were informed at the last minute of port congestion in Bar Harbor…so we had to swap the dates of our visit to Bar Harbor and Rockland (with Castine at night). Because of this swap our time between Rockland and our next port of call became tight so there was not enough time for us to come to Castine this year,” said Claus.

The decision came last minute to all involved. Castine’s town clerk, Sue Macomber, reported that the minutes from the September 6 select board meeting had the ship anchoring at H Buoy and that the select board had given approval for the liquor license required to serve liquor on-board while a ship is in a port.

While passengers would not have been permitted to disembark onto land, there had been a possibility for them to disembark onto other vessels. Karen Francoeur, owner and operator of Kayak Castine, had been in talks with Hurtigruten staff to organize a kayak outing for some of the cruise ship passengers, enabling them to see the bioluminescence that will be in peak form later this month.

Francoeur reported that she is in continued conversations with Hurtigruten personnel, and that the ship plans to include Castine on its itinerary in September 2023. “It’s going to happen next year,” said Francoeur.

Echoed Claus, “We are working immediately to make it happen in the future.”

Ecological and environmental issues are at the forefront of Francoeur’s mind—she’s concerned with such matters as light pollution emanating from large vessels, among myriad other cruise-ship related issues.

“I’ve been talking to people and I’m getting nothing but positives,” said Francoeur about the community’s reaction to the possibility of having the ship anchor in Castine. “They’re very eco-friendly,” she said of Hurtigruten. “They have scientists on board and they are very eco-and educationally based,” she said, citing an on-board program whereby the waters through which the vessel travels are analyzed.

According to the company’s website, the MS Roald Amundsen was built in 2019, the first of two hybrid ships from Hurtigruten. Its “[e]missions are cut by sailing with electrical propulsion…sustainable technology reduces the ship’s fuel consumption and CO2 emissions by 20 percent.”

The ship’s name is derived from Roald Amundsen, the first man to cross Antarctica to reach the South Pole.