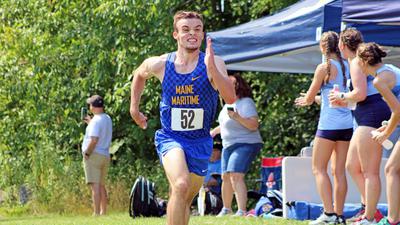 Butterfield ran an impressive 27:55.6 on the 8K course to claim the top overall spot. Sophomore Ponce Saltysiak put together a top-five finish, placing fourth overall, with a time of 28:09.9.

The men’s team placed three runners inside the top five to claim their fourth consecutive title at the University of Maine Presque Isle Invitational September 3. Sophomore Saltysiak paced the Mariners in the season debut, finishing second overall on the 6K course with a time of 21:32.89. Senior Hassett finished just behind Saltysiak in third place, with a time of 22:18.34. Freshman Parlee finished in fourth place in his collegiate debut for the Mariners, with a time of 22:33.61.

Kirra Magaña scored her first goal of the season to lead the Mariners to a 1-0 victory against UMaine-Presque Isle in their North Atlantic Conference opener.

The Mariners got on the board early in the first half when Hazel Stoddard sent a cross to Magaña who found the back of the net in the sixth minute of play. This was the only goal of the afternoon as both teams were able to contain the opponents’ offense for the rest of the match.

The team improves to 1-2-1 overall and 1-0 in conference, while the Owls fall to 1-1-1 on the season and 0-1 in conference. The Mariners return to action on Saturday, September 17, at 3:30 p.m. when they host NVU-Lyndon in a conference matchup during MMA’s Homecoming weekend.

Senior Rachel Melampy recorded 33 kills September 3 to become the third Mariners volleyball player to reach the 1,000 kill milestone as Maine Maritime completed the sweep of opening weekend against the University of New England and the University of Southern Maine, according to the academy.

Melampy and Ila Smith combined for 71 kills to lead the Mariners to a 3-2 win over New England College and a 3-1 win over UMass-Boston in the Beacon Invite September 10.

This week, the Mariners improve to 7-0 overall and return to action on Friday, September 16, at 5 p.m. when they host UMaine-Fort Kent in their home opener.

The men’s soccer team fell to strong non-conference opponent Emmanuel College, 5-0, September 3. The Saints came out strong in the first half, scoring four goals in just under 30 minutes against the Mariners. In the second half, Emmanuel College capped off the afternoon with one more goal to end the game at 5-0. The Saints held a 23-3 advantage in shots and Maine Maritime held a 3-2 advantage in corner kicks.