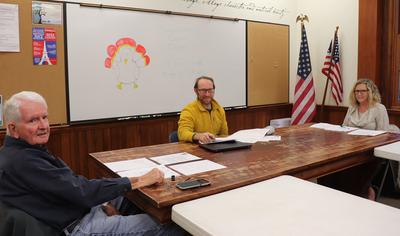 Newest select board member Roberta Boczkiewicz, right, joins other members Gordon MacArthur, left, and Colin Powell at her first meeting since being elected November 8. Powell was elected chair at the November 21 meeting.

Newest select board member Roberta Boczkiewicz joined chair Colin Powell and member Gordon MacArthur at Emerson Hall on November 21, for her first meeting. She was elected to the position November 8.

To join the board, Boczkiewicz resigned from the planning board.

She underwent some training for her new position, as all newly elected public officials do, to become familiar with state and municipal law, she said after the meeting.

She added that she was looking forward to serving and to “getting things done.”

In addition, the board recommends the collective name of “The Meguntic Islands.”

The board’s recommendations reflect the will of more than 300 participants expressed in a binding survey conducted on election day. Other choices, including “none of the above,” failed to garner a majority.

“Esther and Emanuel were two of the earliest known African American inhabitants of Castine dating to between 1785-1790,” the board writes in the memo.

“Meguntic,” according to the memo, “is derived Algonquin and/or Penobscot languages and is translated into English as “smooth in choppy waters.”

The survey vote held November 8 was the culmination of an 18-month effort by a committee appointed by the board to make recommendations for new names for the privately owned islands in the Bagaduce River.

A complaint about the existing names, “Negro Islands,” and an alternative name had been filed with the federal board in charge of geographic place names that appear on maps and charts, bringing the issue to the fore.

Newly elected board chair Colin Powell thanked the members of the Island Name Change Committee for their efforts on the behalf of the town. He also thanked those who participated in the survey.

Although the survey was held on election day, it was not restricted to just registered voters. Others, including summer residents and property owners, could have participated.

In other news, the board approved general fund and water warrants, or authorizations for spending, totaling more than $90,000. Boczkiewicz made a point of explaining what the approved expenditures were for. Purposes included roadwork, excavating and costs associated with elections, she said.

Town manager Shawn Blodgett issued his report to the board. It included news that the stormwater and paving project on Perkins and Pleasant streets was complete.

He also reported that the final version of the phase two report on locating a new fire station in Castine had been received from the consulting firm of Port City Architecture. The report will be available to all via the website very soon, he said.

Blodgett reported that the organization Sailing Ships Maine had announced opportunities for Maine Youth to live aboard the sailing vessel Oliver Hazard Perry in late November through early December as part of their Maritime Trades Program.

Blodgett also reported that Fort George is a historic property in Castine that is owned by the state but maintained by the town. He suggested that the town needs to decide what to do with it.

If the town wants to go the route of historic preservation, that comes with restrictions. Fort George has been used for all sorts of recreation purposes for more than 150 years, he said.

Currently, there is a soccer field painted on the grass inside Fort George.

Resident Debbie Neve suggested a committee be formed to explore what the town wants Fort George to be.

During the public comments portion of the meeting, Josh Adam asked if an environmental impact assessment was included in the fire station final report. Blodgett responded that it was not, and said he would inquire with Port City to check on the status of that part of the report.

Helen Miller addressed the board and asked about the status of money donated for Castine’s celebration of Maine’s bicentennial. There is some $40,000 from donors in an account, according to Finance Officer Karen Motycka.

Miller suggested that communication with the donors as to progress and plans for the money would allay some of their concerns.

The events planned for the bicentennial celebration of Maine’s statehood were interrupted by the COVID-19 pandemic beginning in 2020.

David Adams of Castine also addressed the board about preserving another historic site in Castine, the Baron de St. Castin’s habitation, which is located on the shores of Hatch Cove in the Bagaduce River.

Adams explained that the site was partially excavated by archaeologists years ago, but today it is just eroding.

“I just want to bring it up,” he said. “We must be able to find some money” to preserve a National Historic Landmark, he said.

The next select board meeting is scheduled for Monday, December 5, at 4 p.m. at Emerson Hall.