Castine
Originally published in Castine Patriot, May 5, 2022
Sailing days past and present 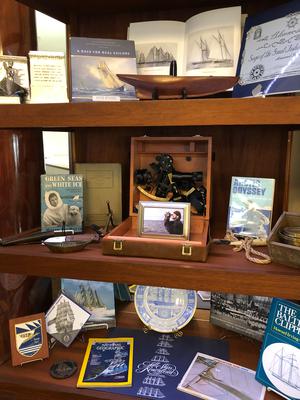 Items from the collection of Christopher Moore now on display at the Witherle Memorial Library as part of the “Sailing Days Past and Present” exhibit.

As spring ever so gradually comes to Castine, thoughts of the upcoming summer sailing season start to stir. As the days get warmer and longer, many people will be at work sanding, painting, varnishing and rigging sailboats, mostly for pleasure, but a few in preparation for another season’s work. This month’s display, “Sailing Days Past and Present,” is a collection of items representing working sail both as it was, with commercial fishing, and how it continues today, as training cadets and carrying passengers.

The Race for Real Sailors tells the story of the International Fishermen’s Cup, a race between Canadian and American fishing schooners during the twilight of sailing fishing vessels. The race was inspired when “high winds” canceled an America’s Cup race in 1920, much to the amusement of the fishermen to whom such wind was simply another day of fishing. The races that followed were every bit as popular as the America’s Cup races and pitted working fishing schooners against each other for national pride. Ultimately, the famous Canadian schooner Bluenose rose as champion of these races and continues to grace the Canadian dime. Photographer Wallace MacAskill created many iconic photos of these schooner races, a book of which is open in the display.

The Stephen Taber, now sailing from Rockland, Maine, was already 50 years old when the Bluenose was launched in 1921. The Taber has long since been converted from carrying cargo to passengers in the Maine Windjammer fleet, and has never missed a sailing season since 1871. Also launched in 1921 was the schooner Bowdoin, a familiar sight in Castine. Although her original purpose was Arctic exploration, her Captain, Donald MacMillan, also took college students along on his voyages, a unique experiential learning opportunity that continues today through its use as a training vessel of Maine Maritime Academy. The sextant on display was used aboard the Bowdoin during her most recent voyage to Arctic Greenland in 2008.

Internationally, many nations’ large sail training vessels participated in Operation Sail 1976 to celebrate the United States’ Bicentennial. The National Geographic cover shows some of the fleet departing Bermuda at the start of a race to the United States with some unfortunate entanglements at the starting line. Once in the United States, this fleet of large sail training vessels made multiple port calls, one of which was in Baltimore, Md. There, the family of Robin Mass (daughter of a German immigrant) hosted a reception in their home for the crew of the German sailing vessel Gorch Fock. The plaque displayed was given to the family by the crew and shows the distinctive, stylized Albatross figurehead of the vessel. The Gorch Fock was the first of five training vessels built to the same design. The second was the Horst Wessel, which was awarded to the United States as war reparations after WWII and is now known as the Coast Guard cutter Eagle.

This exhibit runs through May and can be viewed during regular library hours. For more information, call 326-4375 or email admin@witherlelibrary.net.