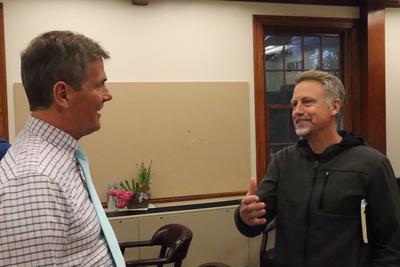 The school board met at Emerson Hall on Wednesday, May 4, at 5:15 p.m., at which time it named Fred Cole as principal. Cole is currently principal at Surry Elementary School.

He will succeed Sheila Irvine, who is returning to the classroom full-time after serving as a teaching principal throughout most of the COVID era. Cole is to be a full-time administrator, not a teacher, too.

Three teachers who were on probationary status were retained, as well.

The board also agreed to establish a committee to work with Castine Community Partners to address the playground at the Adams School.

In other business, the Pre-K advisory committee would like to explore a pilot program of full-day Pre-K. Board member Kate Noel raised the issue of funding since there is no money for Pre-K or an additional educational technician person in the budget now.

Noel asked School Union 93 Superintendent Reg Ruhlin if parents could raise the money to hire additional staff. He said that he would look into it.

In response to a question from the public, Ruhlin told the 15 or so individuals in attendance that a motion could be raised at Town Meeting on May 14 asking for money specifically designated for a Pre-K program.

Board member Temple Blackwood suggested that such a motion should be for a specific amount. Noel reminded everyone that an appropriate space for the program is still yet to be identified.

The next school board community forum will be held around May 26 (the exact date is yet to be determined). Board chair Jake Simmons will moderate the forum, and the science curriculum will be a topic of discussion.

The public forums were established to give parents another way to communicate with the school and the board. Board meetings are “not intended to be a public forum,” according to Ruhlin. They are for the board to conduct business, though they are held in public, he said.

In new business before the board, Ruhlin reported that several bids to provide heating oil to the school have been received. He recommended the low bid, but it was unclear if that vendor would also provide service to the system, if needed.

Blackwood said that answers to the service question were needed before the board could approve. Ruhlin said that if the current bids expire, new ones can be requested.

The board reported on a request from a parent related to whether or not the town should pay for fees associated with children attending John Bapst High School in Bangor. The amount in question was about $500-$1,000 per year in activity fees.

Noel said that the board had not budgeted for any such expense and that “this is the precedent I’ve been worried about all along.” If the town agrees to pay more to George Stevens Academy in Blue Hill, how can the town say no to other schools asking for more, she asked.

Simmons said that the GSA-related warrant article to be voted on at Town Meeting would provide feedback on where the town stands on this sort of expenditure. He suggested that this question ought to be its own warrant article in the future.

Ruhlin reminded the board that only tuition is required to be paid for by state statute, not fees. He recommended that the board only cover tuition at this time.

Noel said, “This issue is probably going to get bigger before it gets smaller.”

The board also discussed how they planned to present the budget at the informational meeting held May 9 at Emerson Hall. That meeting was an opportunity for the community to raise questions about the school and town warrants before Town Meeting, which is scheduled for Saturday, May 14.