Castine
Originally published in Castine Patriot, June 16, 2022
20th Maine Company B to set up camp at the Wilson Museum
Historical lens is that of a Civil War infantry soldier 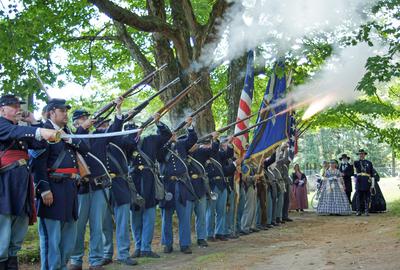 Come to the Wilson Museum and be transported back in time to 1862. The 20th Maine Company B will be setting up camp on Perkins Street, and they look forward to welcoming curious people of all ages interested in learning more about the life of the common Maine infantry soldier during the Civil War, according to a press release. Wander through camp, watch basic drills, see (and hear) what it is like to fire a 19th century musket and listen to short presentations about the history of the 20th Maine Infantry Regiment.

The volunteers of Company B will start setting up camp on Friday afternoon, June 17. They will welcome visitors on Friday afternoon, Saturday from 9 a.m. to bedtime, and Sunday morning, from 9 a.m. to about noon. At 2 p.m. on Saturday, June 18, the volunteers will move up to the Town Common, hosted by the Castine Historical Society, to recruit Castine’s bravest to the cause.

Thomas D. Chamberlain, the youngest brother of Maine’s famous Union General Joshua Chamberlain, is buried in the Castine Town Cemetery. Thomas was the Lieutenant Colonel of the 20th Maine. In 1870, he married his brother John’s widow, Delia Jarvis, and was buried in the Jarvis family plot when he died in 1896.

The 20th Maine Company B is a history oriented nonprofit educational organization whose members hail from across New England. The group authentically portrays the common Maine infantry soldier during the 1862-1865 period. Follow them on Facebook to learn more.