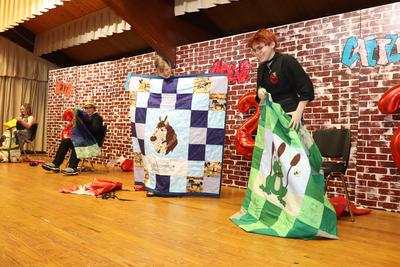 The four—Annette Carter, Lahndon Irizarry, Caitlin Jacobsen and Cadence Pert—were celebrated and celebrated each other during a ceremony in the school gymnasium.

They recounted stories of their school years together, shared slides that included baby pictures, and exchanged gifts. They even presented flowers to staff members.

Educational technician Deb Buese was the guest speaker for the ceremony. Buese has worked at PCS for four years. Prior to that, she was a nurse for 40 years.

With a wink, she said, “I know less now than I did when I was in the eighth grade.”

She offered the eighth graders some advice: Be curious. Ask questions and be your own influencer, she said.

Learn to tell the difference between fact and opinion, something that is not so easy to do nowadays, she also told them.

She also advised them to have a positive attitude, but doing so takes practice, she cautioned.

In preparing for her short speech she read a lot of what the students had written over the years, some of it funny, some poignant, like Lahndon Irizarry’s essay, “How to successfully rob a bank,” she said.

State Rep. Sherm Hutchins, a 1961 graduate of elementary school in Penobscot, was on hand and shared thoughts.

Teacher Susan Varnum continued her tradition of sewing each graduate a personalized quilt, which she presented to them on stage.

Other awards included those of the Daughters of the American Revolution and the Principal’s Award.

Two of the four graduates will attend George Stevens Academy while the other two will attend Bucksport High School.

Cadence Pert receives her gift of Milk Bone dog biscuits, an inside joke, from classmate Annette Carter, while Caitlin Jacobsen looks on. 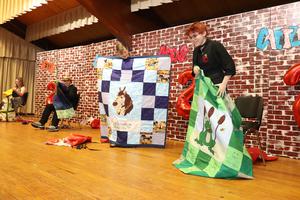 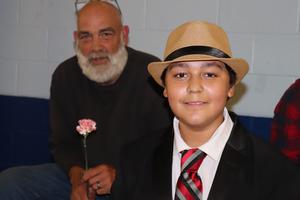