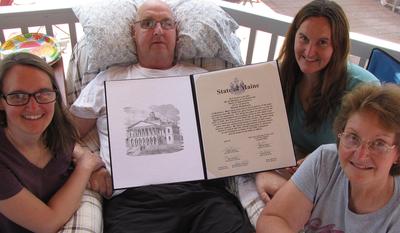 Dennis Robertson with his family, from left, daughters Deborah and Dawn and wife Trisha.

Dennis Robertson and his family were recently surprised with a visit of several friends who presented a State of Maine Legislative Sentiment recognizing Robertson for his longtime commitment to the community. The Sentiment was sponsored by Rep. Sherman Hutchins and co-sponsored by Sen. Kimberly Rosen, according to a news release.

While many know Robertson and his wife Trish as the former owners of Eggemoggin Country Store in Sedgwick, he spent much of his time on call for the Penobscot Fire Department, serving as fire chief from 2007 to 2018. His focus during this time included the safety of his community and the establishment of a new fire station.

Hutchins and Rosen join with the community to express their appreciation to Robertson who has been fighting pancreatic cancer for over 10 years. He has been an inspiration to others battling serious illnesses, the news release said.