Castine
Originally published in Castine Patriot, July 21, 2022
Castine select board hears that elms are at elevated risk
Resurgence of elm disease is statewide 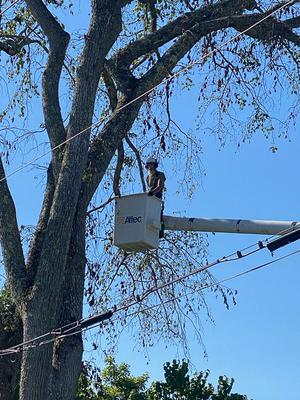 According to a state expert, Castine’s elm trees are facing increased risks this year from Dutch elm disease, Town Manager Shawn Blodgett reported to the select board at its meeting Monday, July 18.

Blodgett quoted state forest pathologist Aaron Bergdahl’s speculation that a statewide resurgence of the disease could be due to the emergence of more virulent strains of DED, changes in the timing of the beetle pest life cycle or stress related to drought weakening elm trees.

Whatever the cause, at least 17 town elms and four elms on the campus of Maine Maritime Academy are known to be infected. Those trees either must be removed or treated for the disease, if possible.

The town’s arborist and the Tree Committee are stepping up their efforts to inoculate and cull trees, Blodgett said.

He also appealed to the audience to support the efforts of the town and the committee.

The board named Andi Lloyd to the Tree Committee. Lloyd is the new minister of the Trinitarian Congregational Church on Main Street. She replaces longtime resident Julie Van de Graaf on the committee.

On July 14, Castine celebrated Bastille Day, French Independence Day, as a nod toward Castine’s French connection. More than 450 people participated in the Picnic en Blanc, where diners dress in all white, Blodgett said. The practice began in Paris in 1988 and has spread, according to Wikipedia. It often involves a secret location, though not here in Castine.

More than 100 people toured the tower of Castine’s lighthouse, which was open for the Bastille Day celebration. Blodgett thanked all the volunteers who helped make the day a success.

The liquor license for Danny Murphy’s was renewed by the select board. Liquor and amusement licenses for the new owners of the Pentagöet Inn were approved, as well. An amusement license was approved for the Castine Golf Club to help celebrate the anniversary of the club later in July.

The select board also approved moving money from a reserve account to cover the town’s increased legal expenses. Issues requiring additional legal expenses included reaching a consent agreement with property owner Ted Regan, of 33 Latour Street, for “a litany of Zoning Ordinance violations,” according to Blodgett.

The board tabled any decision on signing the consent agreement, a negotiated agreement between the town’s attorneys and Regan’s attorneys, until Regan signed it.

Blodgett reluctantly recommended that the select board sign the agreement.

During the public comment section, resident Don Tenney recounted an incident on Bastille Day where a visitor suffered an attack of vertigo while touring the lighthouse. He suggested that medical personnel be on hand to help deal with such circumstances at public events in the future.