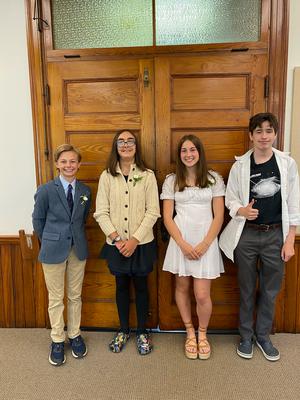 During Adams School graduation ceremonies at Emerson Hall on June 16, Special Education teacher Deletra Schamle emphasized the connections among the graduates and their schoolmates, as well as those with family and community.

Schamle, who was chosen as speaker by the graduates, had something personal to say about each graduate as well.

“Each of you has brought something special to the school during your years here too…Ellies’s compassion and friendship, Stephanie…engaged us with her humor, fire, ambition…and Cormac’s knowledge of minute details…”

Gualtieri won the Bill McWeeny award for math and science. Arentz won the Barb Thomas award for kindness and compassion, and Bernard won the Calder award for perseverance and courage in the face of adversity.

Class marshal Winslow Noel led the class into Emerson Hall, which was festooned with flowers. Music provided by Bill Schubeck, Laura Boege, Tracy Lameyer and Brittany Degrosseilliers set the mood for family and friends to witness and celebrate the accomplishments of Castine’s eighth grade class, according to principal Sheila Irvine.

Besides graduation, the end of the Adams School year was marked by two other seminal events: field day and beach day, organized by the Parent Teacher Committee.

On the last student day of the year, an afternoon at the back shore was an opportunity for parents to have a few laughs and children to have one last romp together.