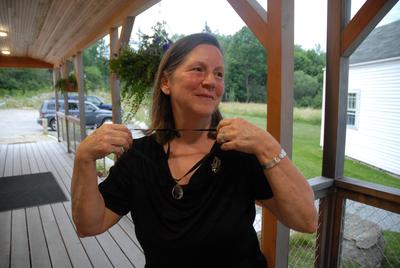 Patty Hutchins officially turns over the reins of the Wilson Museum to a new director on September 11. She has been an influential presence at the museum for most of the last 50 years. Pictured, Hutchins poses with the “Doudiet Diamond” in Mystery Theater, 2016.

September 11 marks the end of an era at the Wilson Museum. Patty Hutchins officially turns over the reins of the organization to a new director. Hutchins has been an influential presence at the museum for most of the last 50 years.

She is happy to leave the museum in the capable hands of new head Julia Gray and in tip-top condition. “We’ve got it all here. It’s a little Williamsburg, but better,” said Hutchins during an interview in her office in the Doudiet House on Perkins Street.

The great-grandmother has been involved at the museum since 1971, when, as a teenager, she volunteered to make costumes for the institution’s 50th anniversary. Later she became a part-time employee doing weeding, giving tours, and cooking.

In 1985 she took over as curator, and then, in 2004, became executive director when Ellenore Doudiet died. Doudiet was the daughter of John Howard Wilson, the polymath whose travels founded the museum’s impressive collection.

Before 2004, Doudiet also served as a mentor and friend to Hutchins. “Ellenore and I became fond of each other,” she explained. Doudiet was childless, and “I really felt like she was my second mother.”

At 17, Patty started dating her husband to be, Sherm, whose father worked part-time for the Wilsons. Eventually, Sherm’s father, Hoyt Hutchins, was employed full-time by the Wilsons as caretaker of both the museum and the house on Nautilus Island at the mouth of the Bagaduce River.

Hoyt was often accompanied by Sherm on various construction projects, such as the one that relocated the John and Phebe Perkins House in Castine from Court Street to the museum campus.

The families naturally became very close. “We always had holidays together at Polly’s house,” said Hutchins, speaking of Hoyt’s wife, Pauline, who was also dedicated to the museum and a friend of Doudiet’s.

Patty laughs when she recalls her first trip to Nautilus Island. She was not very boat savvy, she said. As the boat approached the dock, she thought she should jump to reach it.

Of course, she ended up in the drink. “And that was Ellenore’s first impression of me,” Hutchins confessed.

Hutchins became so close to Doudiet that she spent much time on Nautilus Island with her and even took care of her when she was ill.

While on Nautilus, Hutchins worked for the museum too, transcribing letters and diaries. Her own daughter even helped out, continuing the family connection to the museum that has lasted for many years.

Changes over the years

Hutchins recalls that in her early days at the museum, there was a very small staff of only two or three people in the summer. They typed on manual typewriters and had no telephone.

Today, the museum boasts a year-round staff of five and a group of six to eight docents in summer.

“We have had incredible good luck with our docents. We don’t have a lot of turnover,” Hutchins said.

Over the years there have been many changes. The campus now has several buildings, including a blacksmith shop, for living history demonstrations.

It also has a modern meeting facility named to honor the Hutchins family and their dedication to the museum over many decades.

The museum is even ready to make the lower level into a state-of-the-art archival space.

The more recent changes have occurred under the guidance and leadership of Hutchins. After Doudiet’s death in 2004, the museum moved from a privately owned personal mission to a public nonprofit organization with a board of directors and Hutchins at the helm.

There were growing pains having a governing board, Hutchins explained. “We needed to develop a budget. We never had a budget before, but we were very careful with our fund.”

Hutchins is especially fond of living history demonstrations, partaking in them herself as colonial era bread baker. She has installed programs for woodworking, boatbuilding, weaving, as well as cooking and blacksmithing.

“There have been times when we have had four or five blacksmiths present,” she said.

COVID-19 has presented some difficulties for the museum, “but it hasn’t been so rough for us. We have space, so we spread out,” said Hutchins, speaking of how the the staff managed in winter.

In summer, visitors were guided in small groups. “Everyone was so compliant,” a grateful Hutchins explained. The museum also held some programs virtually because of the pandemic.

This year marks the 100th anniversary of the museum, as well as an end to the Patty Hutchins era of nearly 50 years.

She arranged for a Wilson family reunion. Twenty-five of them came from out-of-state. They were invited to Nautilus Island, which is now owned by Jim Huger.

The reunion served as yet another example of Hutchins’ enduring legacy at the museum, serving others.

On Sunday, August 29, the museum hosted a picnic to honor her. The respect and admiration that so many in the community hold for Hutchins was obvious.

Anne Romans, former director of the Witherle Memorial Library, worked closely with Hutchins on several projects over the years. “She was always lovely to work with, and she and I had a great time doing the storytelling festival [in 2006] because we both have a fascination with stories,” Romans reported.

When the Witherle Library decided to relinquish its archival holdings, Romans wanted the material to go to the Castine Historical Society or to the Wilson Museum. What could have become a rancorous competetition instead turned into a collegial collaboration, which is much to Hutchins’ credit, according to Paige Lilly, curator at the Castine Historical Society. “She is a thoughtful and generous collaborator,” said Lilly.

Lisa Lutts, executive director of the historical society, said of Hutchins, “I have always found her to be willing and eager to participate in history projects that affect the whole community.”

For example, the Castine History Partners, a group of non-profits, worked together to create a virtual walking/driving tour of historic Castine. “We often held meetings at the Hutchins Center and she and her staff were helpful in getting the project completed,” a representative said.

Karen Francouer, proprietor of Castine Kayak Adventures for 24 years said, “I am so impressed with Patty Hutchins and what she has done in this town.” Francouer said she tells the story of the museum and Nautilus Island to her guests when they are paddling by on the Bagaduce River.

Former Castine Town Manager Jimmy Goodson witnessed the physical growth of the museum from his perch in Emerson Hall. “Sherm was always coming in for building permits. It was wonderful to see them move from a single building to what they have now. She really had the vision of what it could be as an educational institution, beyond just a collection,” Goodson said of Hutchins.

Temple Blackwood, the current president of the museum board of trustees, said a hallmark of Hutchins’ skill was the way she created an environment of hospitality. Everyone always feels welcome, he said.

“We have an amazing board and a great staff. It isn’t just me, but the group has come together,” Hutchins said, with typical modesty. The staff works hard. The museum has a great collection and energetic volunteers, and is secure financially, said the woman who made much of it happen.

Departing is bittersweet, she says. “I have other things I want to do.” Among those are painting, which she hasn’t done in a long time.

She also wants to dote on grandchildren, and be involved in her church more. And, she wants to putter in the new greenhouse she’s got at home.