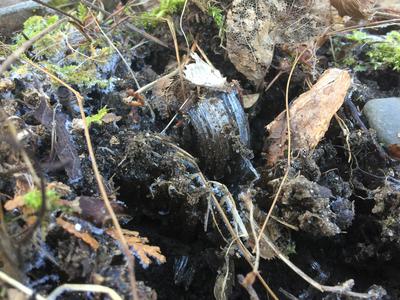 “Can you see this? The ground has been pushed up by ice!”

“It’s pushed the soil onto a pedestal.”

As temperatures drop with the approach of winter, the soil remains warmer than the air. In certain soil types, especially those containing silt or high in organic matter and thereby hold more moisture, the soil water near the surface will freeze with the cold air. As ice is less dense than water, due to the creation of a porous structure upon solidification, ice takes up more space. That expansion gets expressed in the columns of ice formed within soil pores.

While generally perpendicular to the soil surface, needle ice can take on a variety of forms, involving a multitude of crystalline shapes. They can curve under the weight of objects being raised or achieve a rotational twist. When the ice melts, the soil particles don’t return to their former location, resulting in an irregular surface that can crunch under foot. On a hillside, this freezing can result in soil moving downslope, which potentially leads to erosion. The growth of rocks and stones in fields is also attributed to this process.

“They’re actually quite beautiful, once you look closer.”

“Yes they are, aren’t they? When the area is looked at quickly, the soil can mask the crystals and it just looks like a mess.”

“With a little attention, they can be seen as another example of nature’s beauty.”

Needle ice is especially present in disturbed soils. Fall transplanted plants, or late crops destined to overwinter, may become detached from the rest of the soil by these formations. This can lead to desiccation and death, as the roots are exposed to the air and, upon melting, may not resettle into the soil. Mulching the crop or transplant just as air temperatures consistently approach freezing can prevent this from happening.

“Water simply has so many amazing characteristics. Besides the fact that life as we know it cannot exist without it, water has such an impact on the world around us.”

“That’s for sure. The way rivers carve through the landscape, tumbling rocks to smooth their edges, creating soil in the process.”

“The way glaciers ground down mountains and churned through the Midwest to form the Great Lakes, and so many of the lakes around us. Another bit of knowledge to be grateful for.”