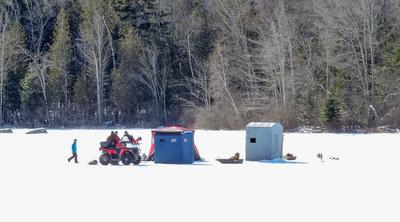 It’s a good thing the ice was thick on Toddy Pond and elsewhere during Slim’s Fishind Derby over Valentine’s Day weekend.

A record 520 people from all over Hancock County went fishing on Valentine’s Day weekend and raised $7,000 for the 12th annual Jimmy Douglass Memorial Scholarship Fund.

Forty winners of Slim’s Fishing Derby got more than $4,000 in cash and prizes, from ice chisels to cast-iron frying pans to lifetime fishing licenses.

COVID-19 restrictions put a slight damper on the event but no one complained and everyone complied, according to organizer Jesse Larrabee in a phone interview. To keep people from gathering while the salmon, bass and trout were weighed, organizers announced the winners on Facebook.

“As much as we hated to, we had to keep people from crowding,” Larrabee said. “It takes away the excitement, the suspense, the climax of seeing the winner.”

The fishing derby began after Jimmy Douglass, known as Slim, died in a snowmobile accident in 2008, just short of his 27th birthday. A Deer Isle-Stonington High School graduate, he loved all outdoor sports, Larrabee said. Slim was so persistent, he got good at them, he added.

Slim’s favorite place to fish was Toddy Pond in Blue Hill. So to honor him, his friends from Deer Isle towed a big ice shack to the pond around Valentine’s Day in 2009. They sold tickets from it, gave prizes to the winners and scholarships to local high school students. Thus was born Slim’s Fishing Derby.

The most surprising challenge, said Larrabee, has been getting students to apply for the scholarships. He’s hoping more seniors from Hancock County high schools will try for the money this year.

The committee of eight, calling itself ”a modest group of hard-working community members,” then started having success problems.

So many fishing enthusiasts began to show up at Toddy Pond this year that the derby had to spread out to lakes and ponds throughout Hancock County, including Walker Pond in Brooksville, Torrey Pond in Deer Isle and even Beech Hill Pond in Otis.

“It was a great problem,” Larrabee said. This year, cold clear weather and thick ice made conditions ideal for ice fishing. Eighty fish were brought in, half of them by young people under the age of 16. They each got a trap while supplies lasted. Two lucky young fishermen, Alex Larrabee and Brayden Dakin, won lifetime fishing licenses.

Throughout the day, door prizes were announced—jig poles, bait traps, an ice scoop, TradeWinds gift cards and a hand auger. And then at 8 p.m. on Facebook, the winners were announced. 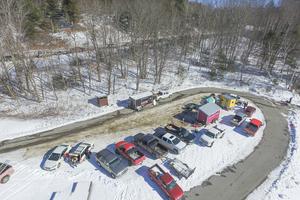 Slim’s Fishing Derby is more popular than ever, 12 years after it started at Jimmy Douglass’s favorite place to fish—Toddy Pond. 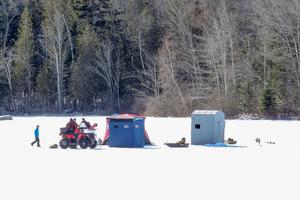 It’s a good thing the ice was thick on Toddy Pond and elsewhere during Slim’s Fishind Derby over Valentine’s Day weekend.