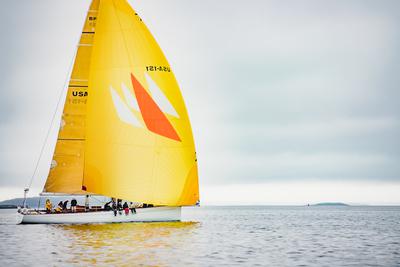 Outlier (USA 151), winner of the Spirit of Tradition.

The 22nd annual Castine Classic 19.6-nautical mile race to Camden, sponsored by the Castine Yacht Club, was sailed August 5 on Penobscot Bay in less than ideal conditions, with little wind and fog. Most of the 32 yacht fleet persevered, according to David Bicks, event chairman, in a press release.

This race was the first of a three-race Penobscot Bay series, followed by the Camden to Brooklin feeder race and the Eggemoggin Reach Regatta.

Santana, a 55’ Sparkman & Stephens design built in 1935 for Humphrey Bogart and now owned and skippered by Wendy Schmidt, took Classic A honors and won the Ames Cup as overall winner of the Classic A, B and C fleets.

The Ames Cup is awarded in memory of the Ames family, which hailed from Castine. Their two sons were lost south of the Grand Banks in an unsuccessful effort to save their father, who was washed overboard in the 1935 Newport to Bergen, Norway, race.

Otter, a 41’ Concordia yawl sailed by Bob Keefer, won the Phalarope trophy as the top Concordia in the race.

The Spirit of Tradition fleet was led by Outlier, a 55’ Botin design, sailed by Harvey Jones.

The Race Committee, headed by Kevin Coady, took special note of the deck dance of appreciation performed by the crew of the NY-32 Vitesse as it crossed the finish line. 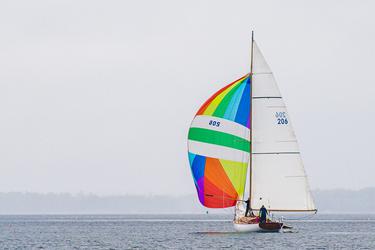 Outlier (USA 151), winner of the Spirit of Tradition.

The Castine Classic fleet under spinnaker on the Penobscot Bay August 5. 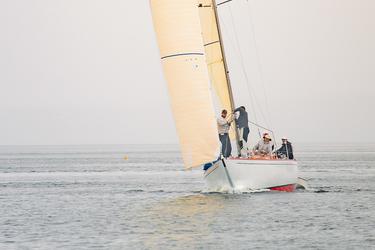