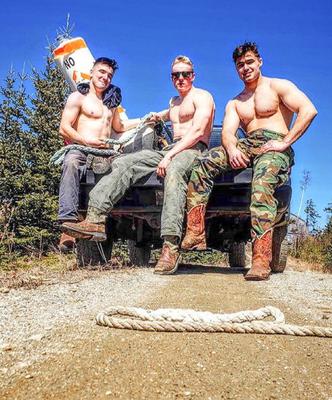 From left to right, midshipmen Nicholas Sobkow, Kristian Kibler and Will Maigetter pose with the flashing buoy safely recovered from the cliffs.

Nicholas Sobkow, Kristian Kibler and Will Maigetter expected a leisurely afternoon, the main purpose being just to “get outside,” said Sobkow.

But instead of a casual exploratory jaunt, the afternoon became a full-on maritime salvage adventure.

As the trio made their way around the cliffs at Dyce’s Head, scanning the tide wrack for interesting bits of flotsam and jetsam, their eyes caught a strange conical object “cradled high up on the rocks” just below the lighthouse, said Sobkow.

Moving closer to investigate, Sobkow realized it was a large buoy, of the type denoting navigational information to watercraft. It even had a light on top, which proved to still be flashing when Sobkow placed his hand over the bulb to block the sun.

Writing on the front suggests it originated from an offshore wind turbine project, and sure enough, its mooring line looked to have been severed by a boat’s propeller.

Currently there are no commercial offshore wind projects operating in Maine waters, although at least one experimental project near Monhegan Island is under development. Additionally, an experimental floating turbine project located in the mouth of the Penobscot River near Castine was conducted between 2013 and 2014.

Thus, it’s unclear where the buoy may have come from.

“We don’t know how far it drifted,” said Sobkow.

Being a maritime-minded group, all three immediately realized the significant hazard a lighted navigational buoy nestled erroneously in the rocks could pose to watercraft at night, especially considering the proximity to the lighthouse.

As they considered what to do, Sobkow, who spent 91 days on an oil tanker in the gulf last year, was especially adamant about removing the buoy from the shoreline.

“I was very familiar with the hazard it presented….From the perspective of being on a boat, you might not be able to tell [the rocks] from a distance,” said Sobkow.

As it turned out, getting the roughly 80-pound buoy up the cliffs proved to be a uniquely difficult task.

The trio commandeered a friend’s truck along with several lengths of rope, and finding an opening in the cliff, rappelled down to the buoy and attached the rope to its rusty shackles. After a laborious process of hauling, pushing and lifting, the group finally got the buoy back up the cliff and into the back of the truck.

“It was a lot heavier than I expected….It took some muscle,” said Sobkow.

The buoy’s time warning ships away from turbines finally over, it has now entered a new service as a conversation-spurring lawn ornament.

According to Sobkow, when the friends return home at night they are greeted by a bright white light flashing at two-second intervals.

It’s also a reminder, said Sobkow, of the importance of vigilance, cooperation and safety on the high seas.

“Mariners have got to look out for other mariners,” he said. 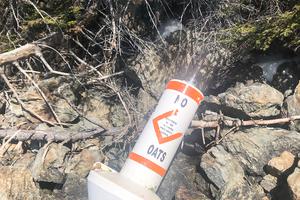 The flashing buoy is potentially a long-lived holdover from an experimental floating turbine project that was located in the Penobscot River several years ago. 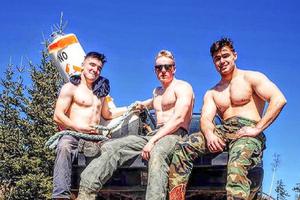 From left to right, midshipmen Nicholas Sobkow, Kristian Kibler and Will Maigetter pose with the flashing buoy safely recovered from the cliffs.