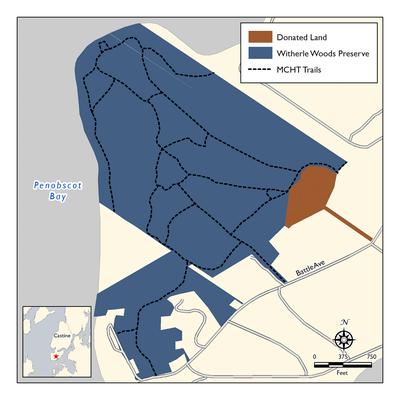 Heirs of the Frederick D. Foote family recently donated eight acres of land to Maine Coast Heritage Trust’s Witherle Woods Preserve in Castine. This gift will enlarge the beautiful coastal property that is open to the public and add access for a future footpath into the preserve from Battle Avenue, according to a news release from MCHT. This is the most recent of many generous gifts of land that have made this preserve what it is today.

MCHT’s Witherle Woods Preserve was first created in 1985 by a gift from the Francis W. Hatch family, and in 1995 the Frederick D. Foote family donated the first addition to it—a parcel of about 36 acres. Foote family members have owned land in Witherle Woods for three generations and are pleased to donate this acreage which includes architectural elements of the former Baldwin Estate.

Witherle Woods has long been an important green space for Castine. Starting in the 1860s, George H. Witherle, a lifelong Castine resident and businessman, began by buying Fort George and Fort Goslin in order to preserve these old fortifications. In the 1870s he bought a tract of woods and pasture land on the northwest side of the peninsula and in succeeding years, worked with citizens to lay out and construct carriage roads. Witherle Park, as it was known then, was open to the public for carriage rides, walking, and picnicking. The Foote family notes, “Today, MCHT’s commitment to conservation management protects the Preserve for public enjoyment, and their stewardship, along with the efforts of the citizens of Castine, have enabled visitors from near and far to enjoy the well maintained and clearly marked trails on this unique and historical woodland property overlooking the Penobscot Bay.”

The Foote gift to the Witherle Woods Preserve provides a scenic approach to the adjacent trails, as well as the opportunity to explore the stone remains of the gates and walls of the Baldwin Estate. This gift also enables MCHT to plan for a new footpath from Battle Avenue into the current trail system.

“This is a very generous gift of land to MCHT, a wonderful addition to the Witherle Woods Preserve, and is a nice chapter in the long history of the Foote family working together with MCHT to conserve special places in Castine,” said Caleb Jackson, Regional Steward for MCHT.