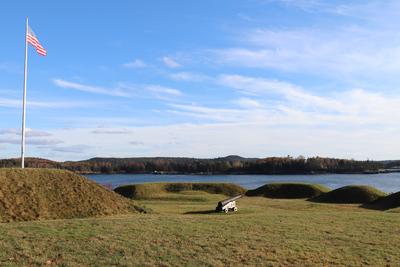 A lone ornamental cannon keeps watch over the entrance to Castine Harbor at Fort Madison.

A little ways down Perkins street, pressed against the shore between several houses, is a row of grassy hummocks overlooking the entrance to Castine harbor.

Framed by a flagpole and an ornamental cannon, these low earthworks are the remains of Fort Madison, a former United States Military compound originally constructed in 1809 and periodically abandoned and reoccupied over the next century.

While the fort’s most bellicose brush with history may have been its prompt surrender to the British during the War of 1812, a curious event took place there on Halloween in 1864, which for a couple weeks caused Castine’s residents to fear for their lives and property.

A 1980 bulletin from the Wilson Museum described the events leading up to what was called “the great raid on the Battery.”

By the 1860s, Fort Madison was already in disrepair, having been abandoned since its occupation by the British in 1814.

The extent of its decrepitude is apparent in a request sent to Washington in 1852 from nearby residents asking permission to salvage the bricks from what remained of the barracks chimneys.

With the onset of the Civil War, the Union Army rebuilt the fort, purchasing an additional acre of land from a Mrs. Sylvester in 1863 to expand its northeastern edge.

Shortly thereafter the fort was garrisoned by a small detachment of 12 Union soldiers.

No doubt being stationed in Castine as brother fought brother up and down the Mason-Dixon line would have been considered a rather dull posting, and as the story goes, the soldiers at Fort Madison decided to have a little fun with the townspeople.

Castine resident Isaiah Sheperd’s diary entry from October 31, 1864, received courtesy of the Wilson Museum, describes “the great raid on the battery” commencing in the early hours of Halloween day.

“Between 11 and 12 o clock the guard at the battery observed some men approaching, he demanded them to halt, at which they fired upon him and he returned their fire,” wrote Sheperd.

The entry continues, describing how the soldiers charged the mysterious raiders, driving them back down to Wadsworth Cove where they “took to their boats and escaped.”

Another Castine resident, Rufus Ames, records the events of the alleged skirmish, contending that only the private on guard, a corporal and a sergeant were awake at the time of raid.

“The next morning when [the townspeople] went down to the Fort we was showned where a number of Balls had struk the Flag Staff and one had went through the Corporals Cap,” wrote Ames, continuing “They showed us where the fence was hacked down in back of the Fort and there was blood on the rails.”

Naturally, this elicited a shocked response from the town.

That night, writes Ames, a special town meeting was held where “the folks of the town said that we must have a guard to walk the streets nights or we should be murdered in our beds.”

Ames along with four others were appointed to go “armed and equipped for any emergency,” on nightly rounds of Castine.

It wasn’t too long however before Ames started having second thoughts.

“I was on about 15 nights and then there began to be doubt expressed whither the Fort had been attacked or not,” writes Ames, adding that another resident, a Dr. Bridgham, contended that the raid was a hoax, and the blood shown to the townspeople was in fact that of a chicken.

By then the elaborate joke was just about up, and shortly thereafter writes Ames, the whole charade came crashing down when the private, corporal and sergeant got into an argument and revealed their prank.

“The sequel to the raid is, the soldiers got it up themselves, the blood was from one of Mrs. Sylvester’s hens,” Sheperd rather succinctly puts it.

While neither diary entry suggests any ill will towards the pranksters, its hard to imagine at least a few residents weren’t slightly annoyed.

A year later, Fort Madison was decommissioned and officially turned over to the town of Castine for use as a public park in 1893.

Thus ended the military history of what the Wilson Museum’s 1980 summer bulletin calls a “long and undistinguished career, which through error, insubordination and lawlessness has been of more danger to Americans…than to the enemy.”

Today, Fort Madison makes a pleasant spot for a picnic or a short amble along its accessible shorefront.

Other than the single decorative cannon, hardly a trace remains of its militaristic past.

But among all the martial anecdotes of this historic town, those three bored soldiers are sure to haunt the stranger pages of Castine’s history for some time.