Penobscot
Originally published in Castine Patriot, May 28, 2020
Alewives appear to be abundant in local waters
Commercial harvest begins in Penobscot 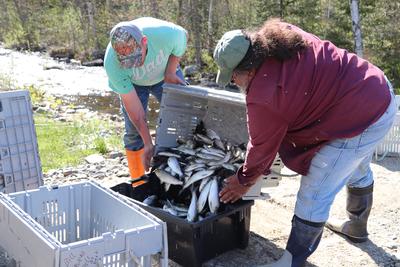 From left, Jeremiah Emerton and Bailey Bowden fill a fisherman’s crate with alewives at Wight Pond in Penobscot.

On a warm afternoon last week, Baily Bowden stood on the bridge spanning the outlet of Wight Pond in Penobscot waiting for the fish he’s spent his whole life admiring.

It’s alewife season again, that curious piscine phenomenon when droves of these anadromous members of the herring family migrate from the ocean to freshwater spawning grounds.

This year’s alewife run into Wight Pond holds the added distinction of witnessing the first commercial harvest of alewives in Penobscot “in as long as anyone can remember,” said Bowden.

Historically, alewives crowded the rivers and streams of coastal watersheds throughout the state around this time of year. Dams and pollution put an end to those historic runs, but slowly their numbers have been on the return. In 2011, lacking the resources to monitor and collect data on alewife runs, the state simply closed the fishery in Penobscot.

According to Bowden, this top down approach went against what locals knew for decades: improve the fish passage and the fish will come. This of course, requires a lot of mucking about up and down streams, removing beaver dams and other obstructions to encourage more fish to return.

A seventh generation Penobscot local, Bowden has spent years spearheading a series of projects aimed at restoring alewife passage to the entire Bagaduce river watershed. The natural fishway at Wight Pond, completed in 2018, was a major part of this larger effort which has amassed thousands of volunteer hours and brought towns, nonprofits and federal and state management agencies to the table to coordinate and manage the revival of this fishery.

Several projects are still in the works, including an improved fishway and interpretive signage at the outlet of Walker Pond in Brooksville and a culvert replacement at Snow’s brook which flows under Route 15 in Sedgwick.

Once these projects are completed, “fish passage will have been restored to the entire Bagaduce River Watershed,” said Senior Project Manager With Maine Coast Heritage Trust Ciona Ulbrich. Ulbrich, along with Collaborative Management Specialist with Maine Center For Coastal Fisheries Mike Thalhauser, has been instrumental in helping handle the policy and grant work necessary to get these projects off the ground.

Ulbrich noted that private donors, along with regional and national nonprofits have put up generous amounts of money for the projects, with federal, state and town dollars also part of the complex funding equation.

Overall though, the impetus remains local.

Ulbrich and Thalhauser agree that Bowden’s was “the voice that got the attention.”

Back at Wight Pond, several pickup trucks rattle up the dirt road and back up to the bridge where Bowden stands. Pulling empty crates from the beds, the buyers watch as Bowden and Jeremiah Emerton dip a net into an improvised fish trap beneath the bridge, heaving dozens of gleaming fish out of the water with each scoop. The fish are deposited into a plastic tub which once full, is dumped into the waiting drivers’ crates.

Most people use alewives as fishing bait, says Bowden, but the market for smoked alewives is growing he noted, as he helped Emerton lift the full crates of fish back into the waiting trucks.

One buyer plans to use the alewives as bait for flounder fishing off Isle au Haut. The other, for halibut fishing out of South Blue Hill.

Penobscot has a permit from the State to harvest 57 bushels of alewives at Wight pond. At around 7,000 fish, that’s a tiny fraction of the approximately 60,000 alewives that have so far entered the pond this year.

To reach this point, Bowden along with Ulbrich, Thaulhauser and other nonprofit partners, had to petition the Maine Department of Marine Resources to request a Federal review of the Maine River Herring Sustainable Fisheries Management Plan, which required towns to submit 10 years worth of data proving fish numbers before being able to manage their own fisheries.

The Feds approved the amendment, reducing that number to five years, essentially recognizing that traditional, local knowledge has an important role to play in management decisions.

“We’re the ones that know what we’re talking about,” said Bowden.

This “bottom up” approach as Thalhauser calls it, is crucial to getting communities involved in stewarding their own resources. Thalhauser pointed to a federal and state project aimed at fishway restoration in Orland that was ultimately voted down by the town because it lacked local input as an example of how a top down approach sometimes misses the mark.

Rigorous data collection is still required to ensure that the alewife run is sustainable, but as Bowden noted, with the amount of volunteer hours required to manage these projects, few people would be able to commit so much time for results 10 years down the line.

As it stands, volunteers engage in “sophisticated citizen science,” to run fish counts each year says Thalhauser. With accurate counts of how many fish enter Wight pond each year, Thalhauser and Bowden hope to begin a fall counting project to determine how many juvenile alewives migrate back to the ocean, thus determining an approximate number that the pond can support.

Once that number is known says Bowden, all the extras that would die off anyway can be safely harvested.

Bowden has already sold out of fish, advertising only through word of mouth. He estimates that the harvest will bring in around $2,000 in revenue for Penobscot, which will hopefully be reinvested in the project.

The Penobscot selectmen have expressed support for the project, recognizing the historic importance of the fishery and its future potential. Chairman Harold Hatch referred to the harvest as “a step in the right direction.”

What’s unique about this entire effort says Thalhauser, is that the majority of the interest and much of the labor is coming from the communities themselves. “That’s the important part,” he said.

As the afternoon slides into evening, another truck pulls up to the bridge. Bowden and Emerton check the trap, shaking their heads.

The alewives, it seems, have decided to take a break in their run. The buyer, another fisherman, leaves Bowden his empty crates and his number to call when they’re full again.

The men chat for a while, and as the truck bounces back down the road, Bowden reflects on all the work he’s done to reach this point.

“It’s worth it to see them bought and sold again,” he says. 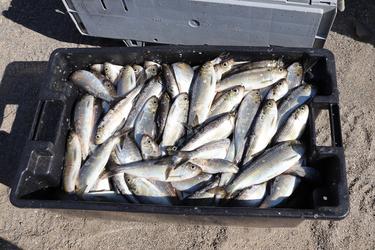 1.5 bushels of alewives fit in this bin, which is used to measure how many fish each buyer receives. The fish pictured are destined for Isle au Haut where they will be used for flounder bait. 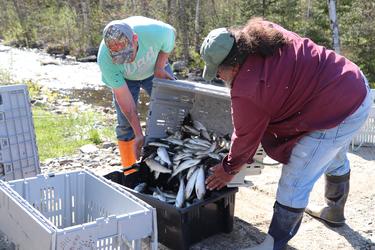 From left, Jeremiah Emerton and Bailey Bowden fill a fisherman’s crate with alewives at Wight Pond in Penobscot. 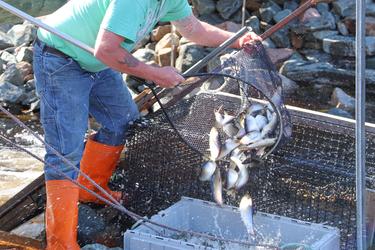 Jeremiah Emerton scoops alewives from an improvised fish trap into a holding crate at Wight pond in Penobscot.

The fish trap in Wight pond in Penobscot allows volunteers to hand count every alewife that enters the pond. Bailey Bowden waits nearly a week after the run begins before harvesting, to allow the large majority of fish to enter the pond and spawn.