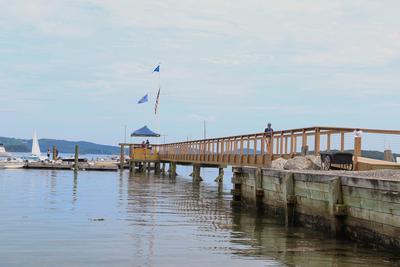 Completed in June, the new pier at the Castine Yacht Club provides more space between floats, decreasing congestion between boats.

It’s been a little over a month since the Castine Yacht Club started using its new pier.

The verdict from Commodore Tom Ashton: “It’s been fantastic.”

The 200-foot long pier was constructed by Prock Marine based in Rockland, as a structural and aesthetic improvement on the aging former structure.

One of the greatest advantages of the new pier, according to Ashton, is the additional space between floats, allowing more flexibility for boats to move around.

“The new float configuration is much improved,” said Ashton.

Ashton said that some electrical work still needs to be finished, but overall the pier is completely operational.

“They delivered it for what they said they would,” said Ashton.

According to Ashton, between $300,000 and $380,000 was directly raised from the membership for both the pier and other improvement projects at the Castine Golf Club, work on which is still pending.

“It’s nice once in a while to make everybody happy,” Knauer said.

Despite some initial uncertainty, the Yacht Club’s summer sailing program is also going strong so far.

“We’ve had a very successful program,” said Ashton, adding that the demand for spots has been so great that the club has had to turn people away.

Many of the spots in the youth sailing programs are supported by the Hatch Community Youth Fund, Ashton noted.

The Yacht club is also gearing up for this year’s Castine Classic, which will take place on Thursday, July 30, with the first start around noon.

Only 14 boats are registered for the race this year, a significant decrease from the typical fleet of around 40.

All shore events are canceled due to COVID-19 concerns said Ashton, and so far the Yacht Club will host two boats on its dock, and one boat on the Castine town dock the night before the race.

Like everything else, said Ashton, everything is “just a little bit slower.”