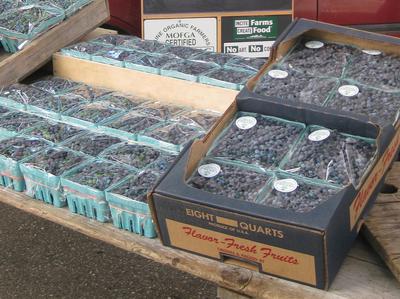 Nicholas Lindholm, the owner of Blue Hill Berry Company, was able to salvage blueberry sales this summer despite both coronavirus and drought-related problems.

Those hoping to stock up on blueberries for the freezer may have limited options this year, as drought conditions combined with coronavirus precautions have reduced yields for many producers both locally and statewide.

On a national level, a significant amount of blueberries originate from Maine producers.

According to statistics from the University of Maine Cooperative Extension, in 2018 some 50 million pounds of blueberries were harvested throughout the state from approximately 18,800 acres.

While many of the larger tracts, known as barrens, are located further Downeast, the Blue Hill Peninsula maintains a long tradition of blueberry cultivation, using both conventional and organic methods of production.

Nicolas Lindholm, owner of Blue Hill Berry Company, is an organic producer based in North Penobscot.

Since the late 1990s, Lindholm has managed around 60 acres of blueberry fields using solely organic methods.

His eight fields, which he either owns or leases, span five towns and are certified organic by the Maine Organic Farmers and Gardeners Association.

Lindholm markets most of his berries directly to consumers and through farmers markets and private orders, and sells some wholesale to freezers such as Merrill’s Freezer in Ellsworth.

This year was anything but typical.

At the outset, COVID-19 required major adjustments to the structure of the season.

“We had to spend a lot of money and time,” said Lindholm, including reducing the size of his crew to nine and developing strict protocols to maintain social distancing.

Lindholm also had the Maine Mobile Health Clinic test every worker for the virus and instituted a daily screening regimen to monitor everyone’s health.

All this preparation necessitated what Lindholm described as “a planned reduction in what we can do.”

Then came the drought.

A series of 80 degree days in mid-July “pushed the crop along dramatically fast,” to the point where, Lindholm said, “the last week in July [the berries] looked like the last week in September.”

His geographically spread out operation is usually a good defense against extreme weather events like this summer’s, he said, as slight climatic variations in different fields ensure that the harvest will be decent somewhere.

Well-drained, sandy soils, usually a boon for blueberries, combined with the relentless July heat, “roasted the berries on the plant,” said Lindholm.

The typical four-week harvest was cut short to a frenzied two weeks, resulting in a “fifth of what we had last year in the freezer.”

Despite the setbacks, Lindholm spoke of strong market sales.

Ultimately, Lindholm echoed what many local people connected with the land have noticed—the increasing unpredictability of the weather and changing seasonal patterns due to human-caused climate change.

“This is the first time we’ve ever seen the crop 100 percent blue in July,” he said.

Across the Peninsula on Cape Rosier, Costas Christ, owner of Blue Sky Farm, described many of the same challenges.

Christ and his family manage 25 acres of organic blueberries just up the road from Bakeman Beach in Brooksville.

“To our knowledge, we are the last of what would be called saltwater blueberry farms,” he said.

Christ began growing berries in 1987, originally leasing the fields to the G.M. Allen company in Orland for a few seasons before taking over the management himself.

Throughout the ensuing decades, Christ watched more and more people come to the farm looking for fresh berries. He now sells 50 to 70 percent of his yield directly to customers at the farm through fresh pickup or pick-your-own, with the rest typically going to wholesale freezers.

Early this spring, Christ made the decision to only open for pick-your-own berries by appointment.

Part of that decision was to provide the community with a fun, safe outing, said Christ.

“We wanted to make sure people had a thing they could do…with families and kids in mind.”

The lack of a commercial harvest may have reduced profits, but Christ emphasized that was beside the point, this year especially.

Blue Sky Farm’s proximity to the ocean mediated this summer’s July heat to some extent. “We were a little more protected than some other areas inland,” said Christ.

As a result, the yields were average, but many of the berries didn’t hold up, said Christ, describing the season as “a race against the weather.”

Christ has also noticed significant changes in expected seasonal weather over the years.

“There’s absolutely no question that we are going through shifts related to climate-changing patterns,” he said.