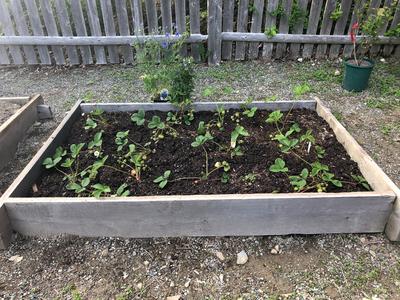 Castine nonprofit Blue Angel grows fresh produce in boxes at Trinity Church, above, and at Adams School, for delivery to hungry families.

“I was working on a story on hunger and I was shocked to hear how many of us are hungry,” author Deborah Corey told the women gathered in Trinity Church June 4. “Many can be helped quite easily.”

Spurred by learning that one in four people in Hancock County don’t always have enough food to eat, Corey formed Blue Angel (blueangelme.org), a nonprofit that works to help end hunger primarily through community gardens. With dozens of volunteers already on board, she held a first meeting to grow that number.

With a $2,600 Maine Farmland Trust Community Food Grant announced May 30 and gardens planted at the Trinity Church and, soon, at the local elementary school, Corey was looking for helping hands, to water, weed, pick up “overflow” produce from local farms, wash produce, pack boxes and deliver food. Local organizations will assist in creating a list of families to receive the Saturday deliveries, beginning in Castine and Penobscot, and a free farm stand at the H.O.M.E. daycare center in Orland on Fridays. Corey said there were already about 10 Castine families that could benefit from the weekly deliveries.

Corey is also accepting a “porch drop” of produce and packaged, nonperishable food every Thursday, 8 a.m. to 4 p.m., at her home at 68 Court Street across from Emerson Hall.

Blue Angel plans additional fundraising through the sale of donuts and cold brew coffee, at the Thursday morning Castine Farmers’ market, on July 4 in front of Emerson Hall, and at T & C and Compass Rose Books. A larger fundraising event is being planned for early fall at the Alamo Theater in Bucksport.

Finding volunteers and donations of goods and services has proved straightforward: “I just ask people for something and usually they give it to me,” Corey said, adding, “People have been generous but we do still need donations and support.”

The volunteers at the initial meeting were ready to help.

“Knowing that one in four children are hungry in this county made me very upset, so I wanted to help out,” said Christine Lutz, one of four mother-and-daughter teams attending the meeting. Lutz added, “And I’m happy to learn more about gardening.”

Along with lettuce, cucumbers, tomatoes and other produce, the deliveries will include a recipe using the food inside, and Corey said the program will eventually incorporate a nutrition and cooking education piece. “But the first thing is to know the families first,” Corey said.

While local churches already help with providing food to families in need, “it’s not enough,” said Amy Stewart. “There needs to be more.”