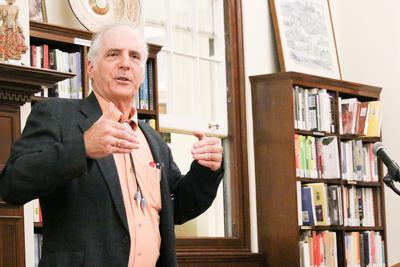 Ralph Chapman speaks at a 2016 candidates forum in Blue Hill.

A scientist and a legislator elected to four consecutive terms in the Maine House, Brooksville resident Ralph Chapman ended his final days representing District 133—Blue Hill, Brooklin, Brooksville, Castine, Sedgwick and Surry—as a member of the Green Independent Party after leaving the Democratic Party in mid-2017.

Chapman ran for office, and handily won re-election three times by margins of 10 to 15 percent, as a Democrat, but his years in state politics led to increasing disillusion with party politics.

“The wisdom of a citizen legislature is that a richness of viewpoints, experiences and expertise can be drawn upon in the formation of public policy,” he told Penobscot Bay Press as a candidate in 2010. But Chapman’s eight years as a state representative changed him, he said, and “all those changes are not necessarily for the better.”

“I’m in a healing mode,” he added with a smile.

Basically, the legislature was “more corrupt than expected” when he first walked into the State House in Augusta. He fell out with his caucus early. “I didn’t accept loyalty as the primary mode of operation, and since I refused to be told how to vote, I was outcast. It’s a loyalty-based bullying culture, which was a disappointment and a source of frustration.”

While Chapman supported and sponsored legislation leading to local food sovereignty, prison reform, education reforms and more, he said he doesn’t “concentrate on the successes of the legislature because my mindset is problem-solving.”

One issue Chapman hoped to address was metal mining. A resident of Brooksville, home to the ongoing Superfund site at the former Callahan Mine, and a neighbor to Blue Hill, site of the former Kerramerican Mine, Chapman worked to pass legislation that would prohibit groundwater contamination from metal mining.

“The reason why I ran for office was to bring the tools of science to bear. That was a spectacular failure with regards to the metal mining issue,” he said. Both Democrats and Republicans “chose to ignore the science and pass legislation to allow permanent, unremediable groundwater contamination of toxic heavy metals and acids, thereby opening the state to the same problems it’s had with [Callahan and Kerramerican] mines.”

Over his four terms, Chapman said he witnessed civility decline in the legislature “as it has society wide,” and less bipartisan effort on one of the legislature’s biggest jobs: crafting and passing the state’s biennial budget.

“In my first couple of terms, the appropriations committee reported a unanimous bill for the biennial budget,” he said. “All discussion was handled in committee [and everyone] came out equally unhappy with it.”

By the 127th legislature, which convened in 2016, the budget cycle had turned “disastrous,” and, with the governor freely using his veto power, “the only things that could pass were those that could override the veto with a two-thirds [House and Senate] vote. That is the reason, in my opinion, why the legislature didn’t get much done.” Chapman sees the increase in citizen referendums as a direct result of this.

But none of his experiences made him regret serving the maximum four consecutive terms, he said.

“At the end of my second term I had a hard time deciding to run for a third,” he said. “If you leave when you don’t have to, what’s the reason you’re leaving?” In the end, a sense of responsibility to citizens “to get the work done” proved stronger than any “personal desire to get out of a bad job.”

He continued: “I’ve learned a great deal. One of my expectations, which was false, was that I’d find half of the legislature disagreeable, [but] 95 percent of my colleagues are decent and well-meaning and sincere people. One should be encouraged by that….It’s not because we have bad people that our government isn’t working well.”

Chapman encourages participation in state and local government in all forms, from voting to running for office.

“The leaders of our community might not necessarily be elected officials [but] are amongst us and all of them are the quiet, self-effacing behind-the-scenes, hardworking folks getting things done and inspiring others to get things done.”