Penobscot
Originally published in Castine Patriot, July 20, 2017
Penobscot graduate gives back to town that ‘made me who I am’ 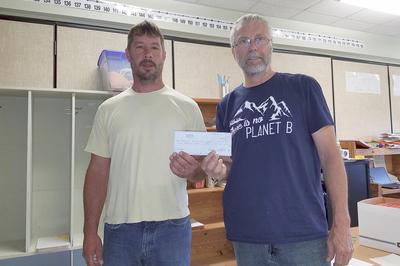 Nathan Wardwell, at left, a Penobscot Community School graduate, recently donated $5,000 to the school of which a portion will be used to send seventh graders to Camp Kieve, said retired principal Allen Cole, at right.

A 1987 graduate of Penobscot Community School, Nathan Wardwell recently donated $5,000 to the school, in a pay-it-forward move that he said will likely be an annual recurring event.

“There’s a lot of memories there and obviously it made me who I am, definitely,” he said. “My teachers were really great to me and I learned a lot from a small community.”

After earning his high school diploma from George Stevens Academy, Wardwell immediately entered the Navy “and said I would never come back to Maine.”

But he did, living for the past 21 years in the Portland area. In 2012, he bought the business he’d worked at for 16 years, a commercial industrial boiler and pipe company, renaming it Wardwell Piping, Inc.

“I was probably one of the kids they probably thought would never make something of myself, probably the least likely to succeed, of my own doings,” Wardwell said.

His mother, Barbara Parker, still lives in Penobscot, and his in-laws have a summer home in Deer Isle, so Wardwell returns to the area when he can.

“There’s a lot of childhood memories there,” he said. “I used to date Angie Henry years ago…We carved our names on a tree over by the old dump.”

Newly retired principal Allen Cole said that $1,500 of the donation will be used to send students to Camp Kieve, an annual week-long event for seventh graders across the Peninsula. “The rest they are now figuring out.”

For his part, Wardwell said he would like to see some of the donation used for vocational programs.

“I know, academic-wise, I was probably the least likely to do homework, to do any work, but when you put something in front of me, [to] build it, then I could figure it out.

“There’s probably a lot of kids like that that get left by the wayside, in general, because they can’t or don’t want to do school work but, in some ways, are more talented than some of the kids that get straight A’s.”

Wardwell said he was prompted to give back to his school because, as a small town, he thought it might need help. “If you have it and can give it, you should,” he said.