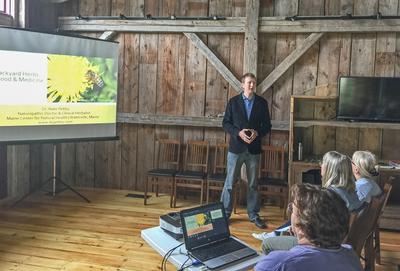 Naturopathic doctor and herbalist unlocks the secrets of local plants

An enthusiastic audience gathered at the Wilson Museum on June 23 to hear Dr. Nate Petley, MS, ND, naturopathic doctor and clinical herbalist, from the Maine Center for Natural Health in Waterville. Petley came to discuss the use of backyard plants for food and medicine. He began with a description of the differences between a clinical herbalist, which he became first, and a naturopathic doctor, which he studied at the University of Bridgeport, Conn., College of Naturopathic Medicine.

Petley took his passion for plant study through landscape horticulture to apprenticing with a botanical pharmacist as an herbalist. The study of clinical herbalism is generally done through an apprentice program with a mentor and has no curriculum standards or certification requirements, he said. Someone versed in these studies works with people to incorporate plant medicine into a healthy lifestyle. An herbalist is not allowed to diagnose people and cannot prescribe medicine.

A naturopathic doctor undergoes a rigorous program similar to a medical degree and is licensed in many states, including Maine. While able to prescribe drugs, Petley said he often develops treatments using native plants. Besides treatment options, the talk focused on edible local plants that can be added to daily cuisine. Petley emphasized the need to ensure that the area from which plants are harvested has not been sprayed with chemicals.

The talk introduced many common plants, known to most in attendance, in a fresh perspective as a food source, a medicinal product, or both. Beginning with the much-maligned dandelion, a spring favorite, Petley discussed its use as a bitter food to wake up the digestion and improve liver function. He compared using the plant to using drugs for the same purpose. Drugs, often derived initially from plants, are concentrated and often have detrimental side affects usually not seen with the whole plant.

Progressing through the use of white pine needles, burdock root, wild strawberry and red clover, Petley paused at St. John’s wort, a well-known plant that has received a great deal of attention for its many benefits. The plant has also been found to interfere with prescribed pharmaceuticals, so caution and understanding of the patient and their treatment plan is of utmost importance. Further discussion proceeded to stinging nettles, mullein, rosa rugosa and yarrow, with the outline of their many uses, preparations and benefits.

Echinacea, a well-known commercial herb, has also been the subject of a great deal of research with mixed results. Petley outlined the differences in studies that produced conflicting conclusions. Frequent use of the product, on an hourly basis, is required to insure positive outcomes, he said. The plant discussion continued with a requested reprieve for goldenrod, which is often accused of causing allergies while the true culprit, ragweed, goes unnoticed. The talk ended with a display of common reference books and a disclaimer that Petley’s statements were not for treatment purposes but simply for information. Any health concerns should be assessed in consultation with a health professional, he said. The presentation was followed by refreshments in the hall at the Education Center.