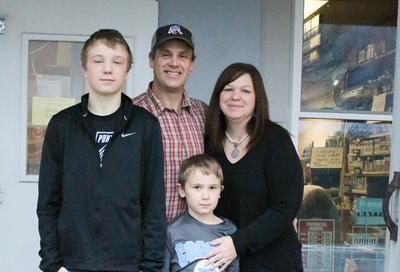 Northern Bay Market in Penobscot has new owners as of January 3. From left, Skylar, Avery, and Jamie MacNair, with Jesse MacNair standing in rear.

The store that anchors Penobscot with pizza, hot coffee, fresh seafood, bottle returns and catching up with neighbors has new owners.

Jesse and Jamie MacNair purchased Northern Bay Market from Jim and Pat Henry on January 3 but have been in training for a few weeks now.

“It just came out of the blue,” Jamie MacNair told the Castine Patriot just after the sale officially went through.

“We knew they were looking [to sell] and we just expressed interest, and a little conversation turned into a lot,” MacNair said.

She said not to expect any changes in the immediate future. The staff remains in place although the store continues to look for a new baker to replace longtime employee Toni Staples, who is now pastry chef at George Stevens Academy.

“The ladies are all on board,” MacNair said.

As she and Jesse continue their training, they will be taking suggestions from customers on any possible ways to improve the general store but, for now, “everything’s going to stay the same,” she said.

The store will continue the tradition of being open 364 days a year, from 6 a.m. to 8 p.m., closing only on Christmas, with a half day on Thanksgiving.

The Henry’s ran Northern Bay Market for 31 years, taking over from Don and Carolyn Blodgett in the mid 1980s. MacNair said she and her family, who will eventually move into living quarters on the premises, are excited to continue a Penobscot tradition .

“We love Penobscot and knew we wanted to do something around here,” she said.