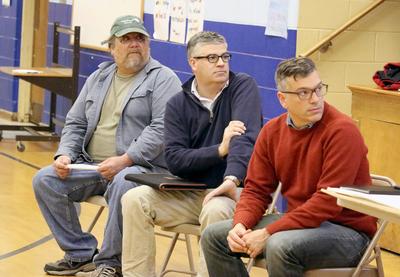 Nearly six years after the Department of Marine Resources suspended the town’s right to commercially harvest alewives and blueback herring, members of the Penobscot Alewife Committee are getting help from some major players in the field of marine resources.

The National Oceanic and Atmospheric Administration and The Nature Conservancy have spent $50,000 to create engineering designs for nature-like fishways in Wight’s Pond and Pierce Pond. Maine Coast Heritage Trust is partnering with the alewife committee on the project.

Each spring, alewives swim up Mill Creek to Pierce Pond and up Winslow Stream to Wight’s Pond to lay eggs. But natural predators, such as bass fish, and low water levels, prevent their safe return to the ocean.

“Nature like” means using natural materials to replicate natural conditions, McLean said, as opposed to a technical fishway that uses items such as aluminum ladders and concrete, which require more maintenance. His designs use stone weirs across the streams to form a step-pool fishway.

The water elevations will not change, but the concrete dam, which leaks water from both sides, would be removed from Wight’s Pond, and the bridge, currently in disrepair, would be replaced.

At Pierce Pond, the existing dam will be reconstructed to create a low-permeability pool, and the boat ramp will be repaired or replaced, if funds are available.

Boat access to both ponds will continue, with full use of the boat ramps.

The designs utilize information from the alewife committee, which has been recording water levels daily, and theoretical hydrology models.

“We apply theories and engineering science, and then check it with real data,” McLean said.

“We’re not asking you to pay for it,” she added. Funding from NOAA and The Nature Conservancy programs may be available.

“We love this project. We want to put money into it. We want to help you fund raise,” said Jeremy Bell, The Nature Conservancy’s Maine Director of Conservation Programs.

A town vote would be required to start the project, which Ulbrich said could begin in 2107 or 2018, with some impact to recreational use during construction.

The selectmen stand firmly behind the project, Selectman Harold Hatch stated. “We’re on board 100 percent. We’ll do what we need to make this project work.”

Alewife Committee Chairman Bailey Bowden began the fight to restore both the fishery and its local control early in 2015, forming the committee and recruiting volunteers to help count the annual runs.

A failure of statistical reporting by Penobscot led to the suspension of its right to harvest alewives. In order to re-establish those rights, Penobscot will need to show that the alewife runs are large enough, and the fish healthy enough, to support a commercial harvest, showing five consecutive years of data. AFter missing one year of filing, the town again began filing its report with the state in 2015.

In Pierce Pond, which is 100 acres, the before-harvest run must be at least 25,850. Alewives haven’t been counted there because of lack of resources, Bowden said.

Next, scale samples must show that alewives are surviving, spawning and returning, based on a sample of 100 alewives or about 0.3 percent of the run.

When juvenile alewives struggle to leave the pond in the fall, Bowden said low water levels can cause “a feeding frenzy” of bass devouring the fish.

Bowden said the benefit of restoring the commercial fishery is not only measured in economic terms.

Both Pierce Pond and Wight’s Pond have a history beyond that of their alewife runs. Both were the site of lumber mills, Ulbrich noted after the meeting.

“These were industrial settings at one point, ” she said.