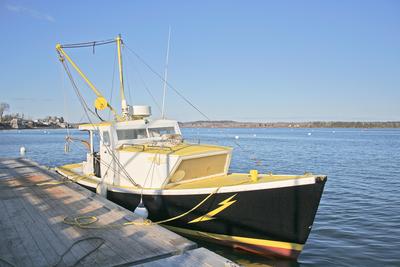 Lobstermen are few in Castine but Annabelle, Kenny Eaton’s boat, shown newly luanched in 2014, is one lobster boat that calls the harbor home.

As the shedder, or soft shell, season winds down with higher value hard shell lobsters on the horizon, local lobstermen are hoping to turn what has so far been a dismal season around.

Lobsters are in hiding, or so it seems to lobstermen.

“I’d say we’ve caught about half the lobsters [than in recent years],” Stonington lobsterman Tony Bray said of the 2017 season.

The Stonington Lobster Co-op, which buys a large proportion of the local catch, reported a 25 to 30 percent drop in volume over last year.

“The lobsters are out there, so this is not likely reflective of a resource decline,” said Maine Center for Coastal Fisheries scientist Carla Guenther, who follows Department of Marine Resources data monitoring. “It may be reflective of a habitat shift as to where the lobsters are, and a behavior shift as a reaction to the colder water.”

For lobstermen, low volume doesn’t equal higher prices. At the dock, price per pound has dropped about 20 percent, with the Co-op paying $2.65 per pound, compared to $3.25 this time last year.

“What determines the price? The processors have a lot of bearing on it,” said Lobster Co-op manager Ron Trundy.

Shedders are not a “shippable” product, he said, and “right now, a lot of stuff coming in is really soft. It won’t live long enough to ship it anywhere.”

While this is true, it is typically true at this time of year so it doesn’t fully explain the drop in boat price.

“One would think the demand would be up at peak season,” said Bray, who sells his catch to the Co-op. “They didn’t have a hard time getting rid of them at a high price last year so why is it different this year?” He offered the idea that buyers aren’t getting enough volume so they are lowering the boat price in order to make more money on less volume. But with bait up $15 a box from last year, and fuel also up, local lobstermen are hoping for a strong fall.

“I’m sure some of them are fairly worried,” Trundy said.

Lobsters do best in water temperatures up to 20° Celsius (68° Fahrenheit). As southern waters warmed, Maine lobstermen reaped the benefits.

In the last decade, the Maine catch has increased, with the last two years breaking its record in value and volume. In 2016, fishermen reporting the port of Stonington as their base hauled more than $65 million, or 17 million pounds, of lobster. For the last nine years, led by lobster, the port has held the distinction of being the top-grossing port in the state.

And while the Gulf of Maine temperatures are increasing—NOAA projects a rise between 2°F and 4°F by the end of the century—warming waters are not behind this year’s catch.

“The long term trends are for warming waters but right now, [bottom] water temperature has been colder than in recent years,” Guenther said.

For lobstermen hoping to turn their season around, offers little comfort.

“If the price of lobster goes up, I raise the price at my restaurant,” said Bray, who sells lobster rolls and dinners at Stonecutters Kitchen in Stonington. “But if the bait and fuel go up, I can’t raise the price I want for my lobster. It’s a completely controlled market.”

“The weather was so bad this spring, maybe they’ll come later,” he added. “We hope to have a good fall.”