Click here to see the full Drugs In Our Communities Archive — Trends, courts and treatment. 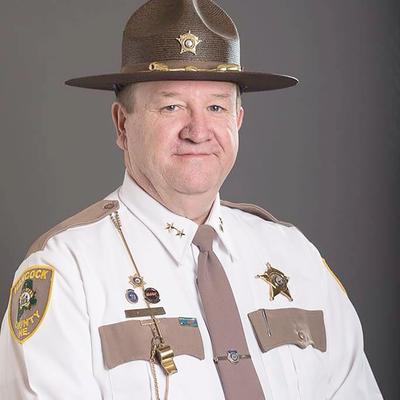 Editor’s note: This is the first in a projected three-part series on drugs in the Peninsula and Island communities.

Peel back the corners of small-town life and big-city problems appear, on a smaller scale but growing in the same way, and for similar reasons, as they do in larger towns. Behind the parades down Main Street, town celebrations, ice cream socials, the yellow school buses winding on country roads, the scaled-down rhythm of summer and crawl of winter, our villages with populations of 600, 1,200, 2,500 are seeing a rise in specific drugs—hard, ugly drugs, such as heroin and methamphetamine—that is being widely reported in larger towns and cities across Maine, in state and national media outlets.

In 2010, there were 238 arrests for drug abuse violations by the sheriff’s department, the Maine State Police and the Maine Drug Enforcement Agency, the three law enforcement agencies operating in Hancock County (which includes the city of Ellsworth, with its population of 7,700, and Mount Desert Island, with a population over 10,000). In 2013 that number was 219.

While there may be little change in actual drug arrest numbers county-wide, it is the landscape that is changing.

Statewide, from 2010 to 2014, the MDEA has seen heroin-related arrests rise from 5 percent of total drug arrests to 32 percent, MDEA Director Roy McKinney wrote in a recent email, while prescription drug related arrests have decreased from 43 to 27 percent. At the same time, MDEA responses to meth labs have increased from seven in 2011 to 37 in 2014—including ones found in Ellsworth and MDI this March.

But it is the presence of heroin, flowing in from large cities, that is raising red flags. Like bodies of water, the flow of a drug does not respect state borders. “Maine is experiencing an increase in drug trafficking organizations and gangs that have a long-established presence in major cities/urban areas,” McKinney said. “Their move into the rural areas of New England is an effort to exploit the low supply in the area for higher profit margins.” 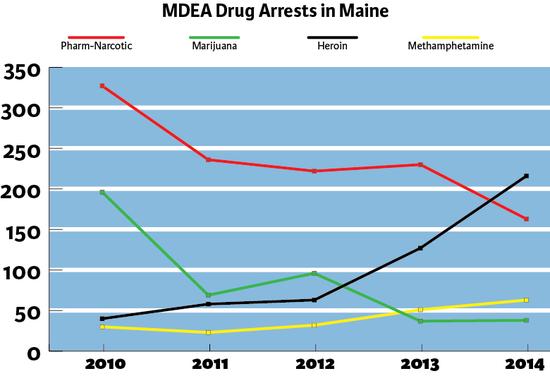 About one in three MDEA drug offense arrests in 2014 involved heroin, with the overall number quadrupling since 2010, according to data released by the Maine Office of Substance Abuse.

The use of heroin, once “rare” in Maine, is “now commonplace,” said Kane, who works with the MDEA on drug-related investigations. The MDEA has placed three agents on a drug task force Kane oversees with the MDEA.

“We’ve seen an increase,” Kane said. “People will stumble across a used syringe—we get those calls on the Peninsula as well [as in Ellsworth or MDI].”

The daily incident reports released by the sheriff’s office bears this out. In early spring, as the banks of snow melted, a Blue Hill resident reported finding a “dirty syringe on the side of the road on Main Street,” one officer reported. One month later, on April 16, two needles were found off Ridge Road in Sedgwick. On July 21, an officer responded to a drug overdose in Surry. 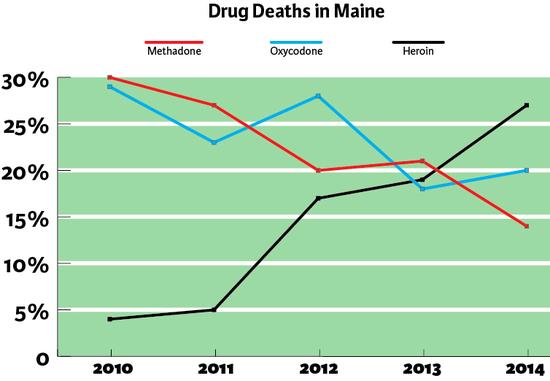 The ripple effect on communities

Crimes against property, such as break-ins and robberies, walk hand-in-hand with drugs. While crime decreased in Hancock County last year, paralleling the 14.9 percent decrease statewide reported July 21 by the Department of Public Safety, “drugs are still the driving force for most of the crime in Maine,” Commissioner John Morris said.

Kane concurred. “Along with the increase in the availability and use of drugs such as heroin and opiate pills, you’re seeing the type of crimes where people have to generate money to support [that use],” he said.

While law enforcement agencies investigate property crimes, they also work on drug investigations that could lead to grand jury indictments. “Traditionally, it takes a long time to put together a [drug] case that stands up in a court of law,” Kane said, partly because the cases often cross county lines. “People [in a different county] may be holding the one piece of information that makes the puzzle complete and the investigation and arrest possible.”

That is where the community needs to step in, Kane said. “Know your neighborhood, know what’s going on, look out for your neighbor”—and make a call. An anonymous text-a-tip line, eTip, is available for reporting illegal drug or alcohol use to the sheriff’s department. That number is 274637 (CRIMES); use eTip to begin the text. Kane stressed that the texts are routed through an anonymous server in Canada, making the tip untraceable to its sender.

“Citizens see things going on but don’t feel comfortable reporting it,” he said. “I think they understand there’s a problem but are not aware of its extent….We’re losing young people, families, our homes are being burglarized. Our jail population is driven by substance abuse.”

Kane said widespread availability is a driving factor. “There’s so much out there. And when you start taking opiates and heroin, it’s a different animal. People have to have it.”

This is the biggest challenge Kane sees law enforcement facing from drug use. “We’re dealing with drugs that are highly, highly addictive,” he said. “It’s just not easy to stop. Some people don’t want to. Some people do, but can’t.”

GALLERY — Drug landscape by the numbers 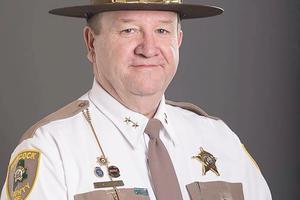