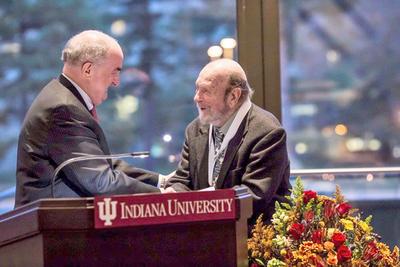 George Ortman, a visual artist who shares his time between New York City and Castine, received a high honor for work that was first displayed at Indiana University over 40 years ago.

University President Michael McRobbie awarded Ortman the Thomas Hart Benton Medallion in an October ceremony. The award, Ortman said in a recent interview, came as a complete surprise during a visit to the Bloomington campus to view the newly fabricated banners and thank the university for its work.

“We had dinner and all of a sudden the president said, ‘I want to present you with this award.’ I had no idea,” Ortman said.

Ortman had originally designed the felt banners in 1972 for the new Musical Arts Center, but they had faded with time and sunlight. The cost to refabricate the banners, Ortman said, was an estimated $80,000. Then the ladies of the university sewing room stepped in.

“When [the university] found out the price they got a little alarmed,” Ortman said. But the re-creations done by the Residential Programs and Services sewing room, based on photographs and material from the university archives, “were perfect…I was very satisfied with what they did.”

The Thomas Hart Benton Medallion is given to individuals who have achieved a level of distinction in public office or service, according to a press release from Indiana University. “George Ortman’s long and distinguished career in art is a model for so many aspiring artists at Indiana University,” said President McRobbie upon conferring the award.

Ortman’s work has been exhibited at the Museum of Modern Art, the Whitney Museum, the Guggenheim Museum and the National Gallery of Art. He has taught at Princeton University, New York University, the School of Visual Arts in New York and the Cranbrook Academy of Art in Detroit.

His painting, sculpture, prints and constructions have been variously described as Neo-Dada, Pop Art and Minimalism.

Currently, Ortman is preparing an exhibit of drawings based on paintings of old masters, such as the architecture in Hieronymus Bosch’s Garden of Earthly Delights and 10 to 15 drawings based on Pablo Picasso’s Guernica.

“[Bosch] had lots of things [in the painting] that were sort of buildings,” Ortman explained. “No one has ever really written or talked about them. They’re the most influential things in the picture.”

“My whole time as an artist, I’ve been involved with the visual languages and why some paintings are good and some paintings I don’t respond to,” he continued. “That has consumed a lot of my thinking … led me in various directions.”

But in the immediate future, Ortman has a pressing engagement: a wedding ceremony to his fiancée of 15 years. They will be married in New York City on Saturday, January 10, and then honeymoon “I think over on the west side” of New York City, he said.

Ortman is an elected member of the National Academy of Design and, among other honors, has received the Lee Krasner Award for Lifetime Achievement.