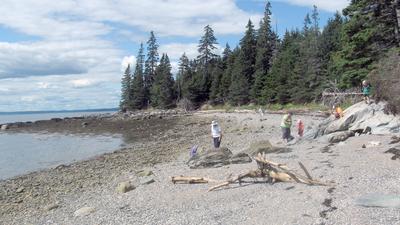 The Hatch Community Fund and Castine Recreation Committee have motored families across Castine harbor twice this summer for leisurely afternoons of strolls, picnics, skimming stones or just poking around the rocky shores of the island.

“Welcome to Holbrook Island,” Maine Maritime Academy marine technician Michael Allen said, as families of two, three, four and more shed their life jackets and traipsed down the dock, branching off onto one of three walking paths.

Holbrook Island is just one parcel of the 1,230 acres that make up the entirety of the sanctuary, a state park that is also supported by the Friends of Holbrook Island. However, to reach the park’s mainland means a drive through Brooksville to Harborside. The easy access of the island from Castine makes it a popular spot for local day trippers. The park does not allow overnight camping.

The sole building on the island is the “old cow barn”—or horse barn; it has been used for both, according to Eli Forman of Oregon, who is spending his summer on the island to help repair the barn, which is over 100 years old. A modern touch is the freestanding solar panels situated near the barn which supply the electricity to the structure, along with an electric cable crossing the harbor.

A third and final afternoon trip is scheduled for August 21, with advance sign-up at the town office to hold a spot on the launch, courtesy of Maine Maritime Academy. Space is limited to 28.

GALLERY — A walk through Holbrook Island 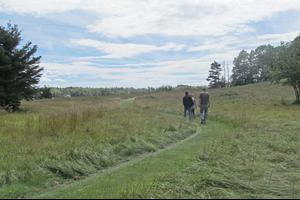 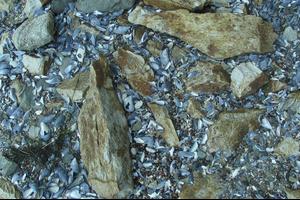 Stretches of the shoreline are covered by mussel shells. 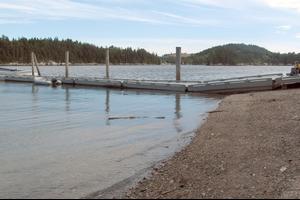 Boats tie up at the short dock. 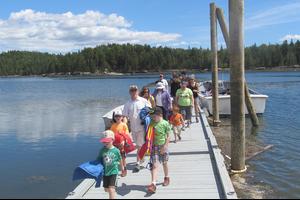 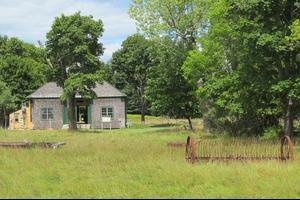 Built in the early 1900s, the old barn is being repaired by summer interns sponsored by Friends of Holbrook Island Sanctuary. 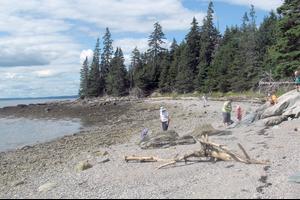