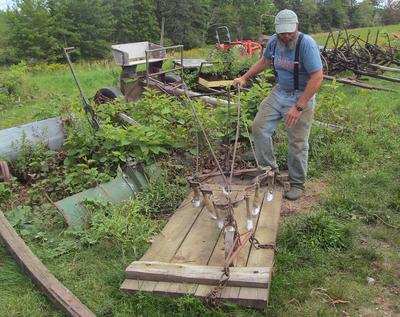 Around 50 people showed up to take in the sights at Horsepower Farm in Penobscot.

This was the season finale of the farm “walk and talks” sponsored by Blue Hill Heritage Trust in coordination with the Blue Hill Co-op.

Summer residents and year-rounders with varying degrees of interest—from curious couples and families to practicing homesteaders—followed owner Andy Birdsall as he guided them across fields, over rolling hills and through cuts in the woods. There were many stops along the way as Birdsall explained the various components of his family’s enterprise.

Three generations of Birdsalls have been working this ground. As Andy Birdsall explained, his father, Paul, acquired the property over 40 years ago. The previous owners didn’t use tractors, and Paul Birdsall was happy to continue in this vein, avoiding what he refers to as “that infernal combustion engine” as much as possible.

When the question “Why horses?” was voiced from a member of the crowd, Andy Birdsall answered, “They are a lot more personable.” Their manure is also valuable as fertilizer, and “the knowledge of horse farming needs to be kept going,” he added.

The use of horses on a farm is also an attraction, Birdsall explained. People are always curious about animals, and the presence of working horses draws other people interested in using horses in their operations.

Andy and Donna Birdsall and their son, Drew, keep up the tradition. They rely on Suffolk Punch draft horses to power the farm’s cultivation efforts, and they in turn meticulously care for these gentle giants.

Drew Birdsall, a farrier by trade, keeps the horses in new shoes. A working draft horse at Horsepower gets new horseshoes every six to eight weeks, he said.

“Hoof care is one of the major parts of owning a horse.” A draft horse can work well into its 20s if properly cared for, Birdsall said.

When asked if farms that employ horses are becoming increasingly rare, Drew Birdsall replied to the contrary: “It’s coming back,” especially with young farmers. Birdsall also cited the Amish, who continue their tradition of using horses.

The Birdsalls’ horses pull carts, cultivators, plows, balers, and other pieces of equipment.

Drew Birdsall said he loves to plow using a team of horses, although “when you work with horses, nothing is ever quite straight,” he acknowledged.

Horse team dynamics are important, too. Some horses work well together while others do not, Birdsall said. A good lead horse will stay in the furrow, and the team will require less steering by the farmer.

Hard working horses eat a lot. Andy Birdsall said the farm devotes from 30 to 35 acres to hay versus the 17 acres used to grow the vegetables they sell.

The Birdsalls currently grow winter squash, beets, dry beans, carrots, potatoes and other vegetables, which are available at the on-site farm store as well as through the Blue Hill Co-op, Birdsall said. People also order vegetables, and Horsepower sells produce to restaurants, too. Most of the food the Birdsalls produce stays on the Peninsula.

The Birdsalls produce vegetables in accordance with standards set by the Maine Organic Farmers and Gardeners Association (MOFGA). The guidelines set by that organization are intended to ensure food safety and quality as well as responsible environmental and sustainable practices. MOFGA specifications govern everything from the types of seed stock farmers use to how manure and other organic materials are composted and applied to the fields, Andy Birdsall said.

Birdsall revealed that growing and rotating different crops involves a careful dance with weeds. Regular plowing can be problematic because it spreads weed seeds around, he said.

But there are solutions. The Birdsalls use cover crops such as oats, which out-compete weeds in the early spring. Those plants can then be cut for hay for animals and the area replanted.

By using cover crops, the fields largely “take care of themselves,” Birdsall said.

The Birdsalls are partnered with the Blue Hill Heritage Trust—of which Paul Birdsall is a founding member—through the Farmland Forever program. BHHT volunteer Judi Hilliker explained that the program protects lands in conservation easements along the Route 15 corridor. Those properties will be reserved for agricultural use and can never be developed, she said.

The program was started in the 1990s, during a time of increased development in the area, to help people acquire and keep farmlands. Land at that time was too expensive, Hilliker said, “particularly for young farmers. They couldn’t buy [farms].”

“But it’s less of a struggle today,” she said.

There will be more farm tours next season, according to BHHT membership coordinator Eileen Mielenhausen. “We try to vary the farms… to visit [farms] we haven’t been to in a few years,” she said.

Mielenhausen also hinted at another sustainable agriculture and land conservation panel discussion at the Halcyon Grange. Plus, next year will mark BHHT’s 30th, so there will be special events planned, she said.

GALLERY — The Birdsall's host a "walk and talk" at Horsepower Farm 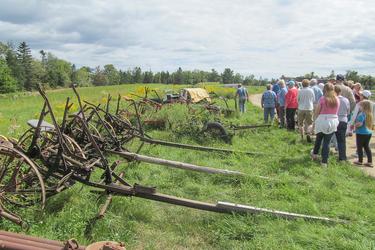 Visitors stroll past a line of cultivators. 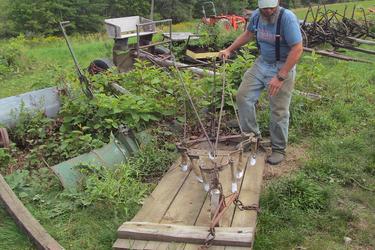 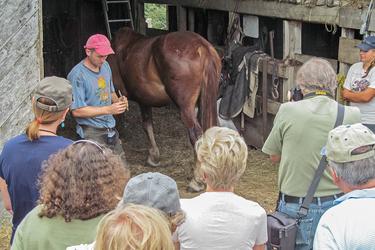 Drew Birdsall explains the importance of hoof maintenance to a horse’s health. 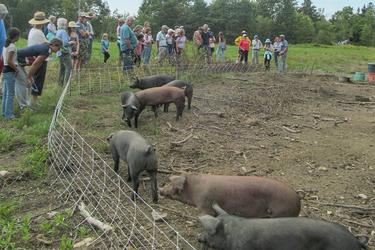 Pigs walk up to greet visitors.