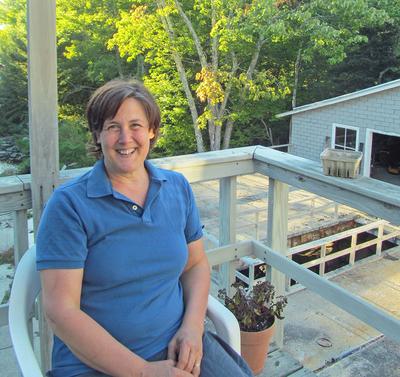 The old cannery building in South Penobscot is again alive with creativity and industry.

This time, avant-garde performance artist and bassoon-maker Leslie Ross has set up shop in the venerated complex.

Ross relocated to Penobscot from New York back in May, and she has already christened the site, having hosted a gallery reception and musical performance event in early September.

She is still very much in the process of settling in, and her tools, musical instruments, bassoon making supplies, books, sculptural works and personal effects swirl together in many corners of her new home.

And home is a construction site as well.

Ross was prying old shingles off the side of the building right up to the moment before her interview with the Castine Patriot. She is adding windows to the section of the building that will contain her bassoon making operation.

The art of bassoon making

Ross has been creating bassoons for the past 30 years. She studied and worked under a bassoon maker for eight years before starting her own business, which she had operated on Manhattan’s lower east side until now.

Ross said she has always constructed things, adding “It was always a part of who I am.”

She carved, knitted, assembled—as well as disassembled: as soon as she was allowed to take her bassoon home from school at age 14, the first thing she did was strip off all the keys.

“It didn’t go back together quite as easily,” she acknowledged.

Now she builds bassoons of her own design as well as replicas of bassoons from the Baroque, Classical and Romantic eras.

Ross is devoted to the acquisition of fine quality woods, which are highly valued in bassoon making. She collects large cuts of tiger maple, pear and apple, and she often finds herself in direct competition for these precious raw materials with other instrument crafters as well as gun makers, who use fine woods for rifle stock.

Methods of finishing the wood’s surface include staining and using acid. Ross said that acid results in a greater variety of color tones, but there is often a risk of damaging the wood.

She works in soldering as well, and crafting the bassoon keys is an art unto itself.

Bassoon wood must be aged for a year after it has been roughly lathe-turned before it can be finely cut to its proper thickness and shape, Ross said. She also includes a warranty with her bassoons that stipulates they be returned after a year’s time. This is because the wood will have certainly “moved” during that period, and adjustments are necessary, she said.

Performance, and the “texture of sound”

Ross has a well-documented career as a musician, sculptor and performer—or more accurately, an artist who inhabits all three of those roles simultaneously.

Around the time she began her apprenticeship in bassoon making, she also discovered improvisational performance. This unleashed her creativity in all directions, she said, and she began making sculptural, musical contraptions and using them in performance pieces.

Ross has, perhaps above all else, a deep connection with sound. She revealed that “the texture of sound” is more important to her than harmony.

“Small fluctuations are just as captivating” as larger sounds, she said.

She explained that with real instruments, there is “something about sound that you experience physically beyond what you hear.”

She attributes this to the resonance of sound in the body.

Ross explores these phenomena with monk-like devotion, and the bassoon is especially powerful as a vessel for sound.

She studies multiphonics, or techniques of playing the bassoon in which more than one note are produced at a time. This requires intense concentration and physical stamina to maintain airflow from the diaphragm.

Multiphonics are a part of her creative efforts with the bassoon, and her playing often takes on a meditative quality.

Ross reflected on her beginnings in performance art, stating that she used to frenetically bounce from one idea to another, becoming bored easily.

She recalled a quote of hers from this earlier period with a sheepish smile: “I used to say, ‘If I heard something twice, I’ve heard it once too often.’”

But returning to the present, she affirmed, “I can now say I’m a minimalist, but only because the material requires it; not by design.”

She has enjoyed meeting people in the area, and once settled in, she hopes to learn more about the community and the Peninsula.

“[I am] hoping to discover this neighborhood,” she said, and she added that she didn’t move to the area just to work alone in her studio.

But Ross is also the type of character who brings community with her. She and her partner, writer Zeke Finkelstein, had planned to transform whatever dwelling they managed to inhabit into a place where they can host performances and collaborative efforts in addition to a home where they can comfortably reside.

Ross and Finkelstein had put together a short list of nice farmhouses for consideration, Ross said, but in the end the former cannery site stood out.

The history of the building—and its unique location straddling Winslow stream—were especially appealing to Ross.

She predicts that her future sculpture-performances will likely incorporate stream and river-related themes.

And tin cans, too. She has boxes of them left by previous occupants of the cannery building. 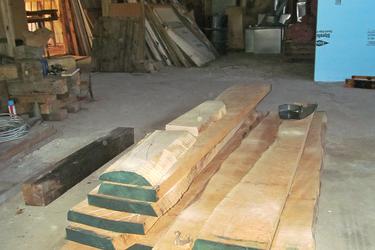 This tiger maple is highly prized for the character and beauty it will bring to musical instruments. 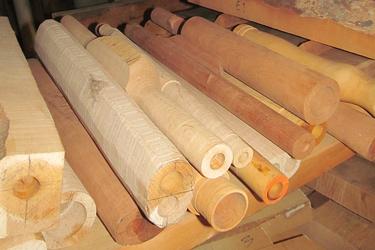 These turned pieces of wood must age for a year before they can be transformed into bassoons. 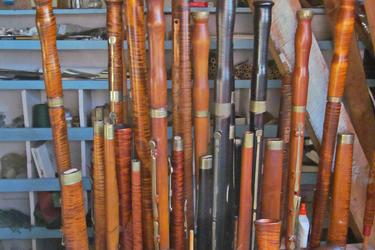 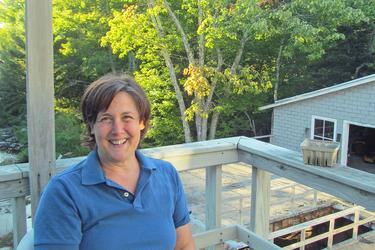