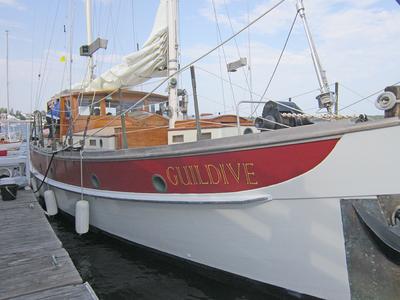 The Guildive rests at her home dock in Castine, Maine on July 26, 2014 during an open house to celebrate her 80th year on the water. For the past several years, her captains, Zander Parker and Kate Kana, have run day trips on and around Penobscot Bay.

Castine Harbor was the scene of a birthday party last weekend celebrating Guildive, the 56-foot motorsailer that for the past several years has been based in Castine offering day trips throughout the summer.

Guildive was designed as a private motor yacht for a New York family for excursions up the Erie Canal. She was built at the Wheeler Shipyard in Brooklyn in 1934 where, according to captain and co-owner Kate Kana, her neighbor at the yard was another pleasure yacht, Pilar, writer Ernest Hemingway’s famed fishing boat.

According to captain/co-owner Zander Parker, a 2004 MMA graduate, Hand was concerned first and foremost with safety. He usually avoided bowsprits, and most of his boats have a high freeboard which keeps people off the water. “Even in his boats that were made for speed, he really took it to heart, the safety of the mariner,” he said.

The boat has a big diesel engine in it, but Kana said they use the engine to get out on the bay and then raise the sails. Guildive is a great sailer, she said.

Most of their cruises visit the nearby islands or head out on the bay. They also offer a trip to Searsport, which includes tickets to the Penobscot Marine Museum.

Parker and Kana are Guildive’s ninth owners, and the open house/birthday party drew visitors, some of whom had sailed on board Guildive in one of her other incarnations. Among them was Dmitri Bernhardt, who owned the vessel for 29 years before turning her over to the current owners.

It was Bernhardt who restored the boat which, he said, had not had much work done on it and was in pretty bad condition.

“It had a brand new engine, but that was it,” he said. “I sailed it for four months without any maintenance. My only job was to keep it afloat.”

His restoration covered most parts of the boat, and only the wheel, the rudder and parts of the steering console are original.

Bernhardt sailed the vessel up and down the east coast and also offered charter cruises. He said the boat has been very lucky in that wherever it has gone, it has been embraced by the local communities.

“I feel lucky to have found a couple who will keep it better than I did and who will love it,” he said.

Parker and Kana live on board year-round, spending summers offering cruises on and around Penobscot Bay, and wintering in the Chesapeake Bay area where the warmer weather allows them to work on the boat in preparation for the summer cruise season.

The birthday party also served as a gathering of William Hand-designed boats. On Saturday, Bowdoin joined Guildive with an open house. The event provided an opportunity to bring people on board the schooner, according to its captain, Eric Jorgensen. The Bowdoin is usually sailing with a student crew at this time of year, but after they discovered rot in the main mast, the vessel returned to its home port to undergo repairs.

Shipwrights already have laminated Douglas fir planks together and are scheduled to begin shaping them into a new mast. Jorgensen said they hoped to have the schooner back on the water by mid-August.

Two other vessels were scheduled to join the celebration. Burma, a 57-foot motorsailer designed by Richard Davis, who had worked with Hand and had drawn the lines for many of his designs, was scheduled to arrive on Sunday. Parker said they were also hoping that Tracker, a 46-foot motor boat and the last vessel designed by Hand, would also be able to be in Castine for the celebration.

GALLERY — The Guildive and the Bowdoin in Castine Harbor 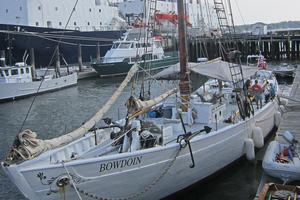 The schooner Bowdoin, a training vessel of Maine Maritime Academy in Castine, Maine, is docked and open for visitors on July 26, 2014. 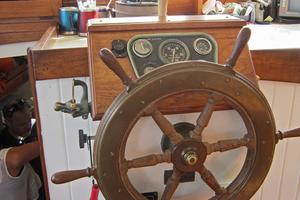 The wheel on Guildive is the original on board the 80-year-old boat, which received a major restoration beginning in the 1970s, and was open for tours on its 80th birthday on July 26, 2014. It is docked in Castine, Maine. 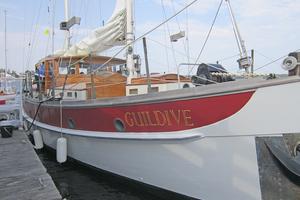 The Guildive rests at her home dock in Castine, Maine on July 26, 2014 during an open house to celebrate her 80th year on the water. For the past several years, her captains, Zander Parker and Kate Kana, have run day trips on and around Penobscot Bay.