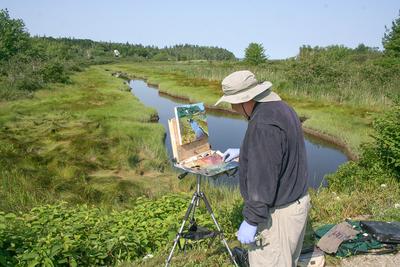 Castine’s second annual Plein Air Festival concluded its a three-day run on Saturday evening, July 26. The festival began with a rainy morning registration on the town common. Artists began painting immediately, despite the soggy conditions. Skies cleared later in the day, and the rest of the three-day festival enjoyed sunny warm days, according to a news release from Castine Arts Association.

The artists produced 263 paintings. Eighty-five paintings were sold during the two-hour reception and sale on Saturday evening, with hundreds of art enthusiasts flooding Maine Maritime Academy’s Alfond Student Center to see the artwork created over the festival days.

Painting “en plein air” in Castine. The second annual Castine Plein Air Fest drew 40 artists from near and far for three days of outdoor painting. Whether inspired by Dyce Head Light House, as was Fenner Ball of Blue Hill, shown above, or a different view, 40 artists set up easels and paint boxes throughout Castine, Maine from July 24 to 26, 2014. It all ended with a reception, juried show and sale, with “hundreds of art enthusiasts flooding MMA’s Alfond Student Center to see the artwork created over the festival days,” wrote event co-organizer Don Tenney. Photos by Don Tenney

Based on the success of this year’s event, planning has already commenced for the 2015 festival. Many of 2014 artists have already expressed their eagerness to participate in next year’s event, according to the press release.

The Castine Arts Association is a nonprofit, community-based volunteer group organized for the purpose of promoting awareness and appreciation of visual, literary and performing arts through sponsorship of public programs and events.