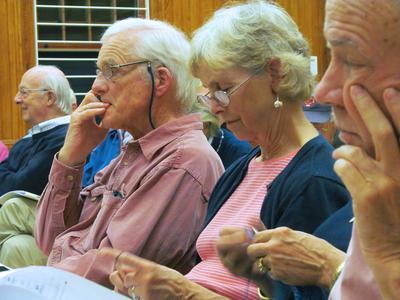 A September 12 public hearing held by the planning board lasted two hours; many stayed to hear the board vote on whether to recommend each warrant article. Forefront, from left, are Gil Tenney, Brooke Tenney and Bill Sayre.

“People have to think about if T&C didn’t sell gas,” said planning board member Doris Russell. “You don’t wipe out the possibility…that we could put it in anywhere else. We don’t want to cripple the town.”

Russell spoke to about 35 people at a public hearing held by the planning board on September 12. On the table were 42 proposed warrant articles amending the town’s existing zoning ordinance; selectmen signed the warrant four days later, on September 16. Each article is to be voted on separately at a September 23 special town meeting.

The planning board voted to recommend passage of most, but not all, of the articles. The vote on many was 3-2, with Chairman Douglas Wellington and Tom Comiciotto voting no, while Russell, Vice-Chairman Pär Kettis and Bob Friedlander voted yes.

“I think it behooves us to go with the recommendations of the Comprehensive Plan Implementation Committee,” said Russell.

The CPIC, formed by selectmen in 2011, was disbanded at the committee’s request last November. Its zoning subcommittee revised the existing subdivision ordinance, which passed in the November election, and the zoning ordinance, which passed in June after selectmen removed all proposed land use changes. Those proposed land use changes are included among the zoning warrant articles up for vote on September 23.

Most articles, if passed, would allow a use—with planning board approval—in a district that is now restricted by the ordinance. A few would restrict uses currently allowed. The table, created by the Castine Patriot, on page 2 lists each article and what a “yes” vote would mean.

What exactly “planning board approval” means has been a point of confusion, or a bone of contention, for many citizens in the weeks leading up to the vote, nearly as much as the articles themselves.

Wellington explained that in approving a use allowed under the ordinance, the five-member board must agree by majority vote that an application submitted to the planning board meets the ordinance requirements.

Apart from established criteria, such as setbacks, height and parking requirements, are the six purposes of the ordinance, first of which is to implement the comprehensive plan.

The last purpose is to establish uniform procedures and standards to review land use proposals.

The four purposes that lie in between seek to “promote and protect” the village character, an economically stable community, property rights and values, and town resources “from unreasonable adverse impacts.”

Arnold Berleant agreed. “The [site plan] review process is filled with phrases like ‘reasonable.’ It’s not objective at all. ‘Planning board’ [in the proposed land use table] means ‘Yes,’ in practice.”

Wellington disagreed. “With any regulation, you’re going to have some leeway. It’s very difficult to quantify some things.”

In addition, Wellington said, any board decision can be appealed to the board of appeals. “We’re not the final arbiters of whether things go forward.”

Several citizens at the hearing, and at earlier meetings, have pointed to contract zoning as the answer.

“It’s better to allow exceptions if there’s a genuine need,” said Barbara Griffith. “We are still in a position to allow anything [if] the town agrees, as a whole, is a benefit.”

“The proposals are to make it less subjective,” said Code Enforcement Officer Drew Marks. “Based on the history of the town, we have made serious zoning changes based on the fact we didn’t like someone.”

The comprehensive plan, and the town survey

The comprehensive plan, passed by town vote in 2010, recommended the town look into opening up the rural district to new uses through amending zoning ordinances.

“I haven’t seen anything in the comprehensive plan that warrants us making [the proposed] changes to the zoning ordinance at this time,” said Julie Van der Graaf, a Community and Economic Development committee member, at the planning board hearing.

The CPIC sought to revitalize a town that has money but is in danger of losing services because of an aging population, committee and community members have said at past meetings. Its subcommittees tackled zoning, economic development and affordable housing.

Proponents of change have pointed to the December 2011 closing of the local ambulance service because of lack of volunteers; the aging volunteers of the fire department, despite Maine Maritime Academy student participation; and the difficulty of bringing young families to Castine given the high cost of housing.

However, a recent survey by the Community and Economic Development (CED) committee found that given 17 choices, Castine residents and taxpayers rated natural environment as most important to them, and over half chose the town government’s primary focus over the next 10 years as protecting natural resources.

Among nonresident MMA faculty and staff, 53 percent said that cost of housing was the most significant factor preventing them living in Castine.

Both groups had a mid- to high-30 percent response rate.

“There’s a lot of good information that I feel should be the backbone of what the CED stands for,” said Sue Walsh, economic development consultant and a non-voting voice on the CED committee.

The CED elected to not release the survey results to the general public until it reviewed the information at its next meeting.

Selectmen stood ready to sign the special town meeting warrant on September 16, but had to first resolve a quarrel over the authority of three municipal committees’ recommendations.

As presented at the meeting, each warrant article was prefaced by the recommendations of the planning board, the Comprehensive Plan Implementation Committee (CPIC) and the Community and Economic Development (CED) committee.

The planning board’s recommendations were underlined for emphasis at the request of member Bob Friedlander.

“The planning board is in the zoning ordinance to report its recommendation on changes,” said Friedlander. “The other committees, though valid…are not required to approve or disapprove recommendations on zoning.”

Jack Burke and Selectman Gus Basile took issue with this.

“The CED has just as much authority as the planning board,” said Burke (who is not a member of the CED).

The CED has recommended that most warrant articles should not be approved. The planning board and CPIC recommend that most should.

Pat Bishop, a CED member, disagreed with Burke. “I don’t feel the CED should have much clout,” she said. “We didn’t get into the zoning laws…we didn’t study it like the planning board or the [CPIC] zoning committee. I don’t even think we should be considered.” Also, she said, two members were absent when the CED voted on the warrant.

“I’m just trying to remember the status of all the groups,” said Selectman David Unger.

All three committees are composed of members appointed by the selectmen. However, the planning board “has a special role by ordinance,” said Unger.

Burke, who came under fire for his aggressive manner and for posting a Dunkin’ Donuts feather flag at different locations in town, repeated his demand that the CED be given equal billing on the warrant.

Basile and Burke prevailed when a brief explanatory phrase stating that the planning board is required by ordinance to make a recommendation was added to the warrant. Selectmen voted 3-0 to approve the change and sign the warrant.

When it came time for public comments, Gordon MacArthur stood up. “I strongly object to the total disrespect of the town and its ordinance,” he said, mentioning specifically the Dunkin’ Donuts sign, “[and] the desperate attempt of those opposing changes to zoning using scare tactics.” He requested the selectmen contact the sheriff to investigate whether Burke had stolen the sign.

“I own it, I bought it, I contacted my lawyer; he looked at the ordinance and said it was legal,” said Burke.

“If we’re going to get anywhere, we need to start respecting each other,” said Lynda MacArthur. “People now look at Castine from outside and ask, ‘What the hell is going on?…When are we going to have some leadership? When will people see we all want Castine to succeed?”

To see the breakdown of the zoning warrant, click here. 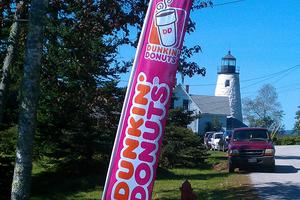 Citizens exercise their right to free speech in Castine before a September 23 special town meeting on zoning changes. 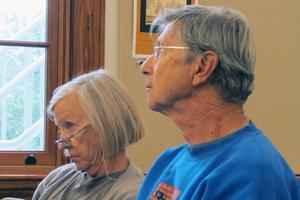 Sue MacDonald, Chairman of the now-disbanded Comprehensive Plan Implementaiton Committee, and Bob Friedlander, member of the planning board and chair of the now disbanded CPIC zoning subcommittee, listen at the selectmen’s September 16 meeting. 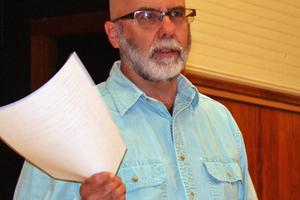 Planning board Chairman Douglas Wellington explained the warrant, article by article, at a September 12 public hearing. 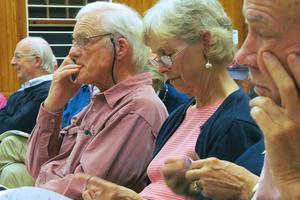 A September 12 public hearing held by the planning board lasted two hours; many stayed to hear the board vote on whether to recommend each warrant article. Forefront, from left, are Gil Tenney, Brooke Tenney and Bill Sayre. 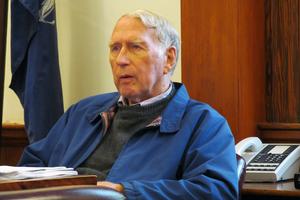 The planning board “has a special role by ordinance,” said Selectman David Unger when selectmen signed a special town meeting warrant on September 16.