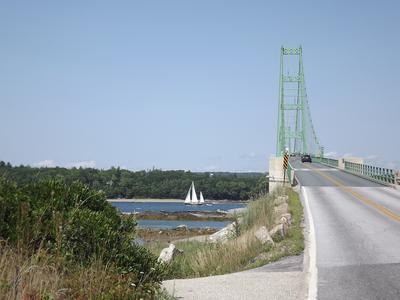 Bridge work is set to begin on Monday, July 22. Drivers will likely have plenty of time to contemplate the scenes at the head of the island as traffic will be one-lane through mid-December.

A series of work projects that range from tightening cables to adding aviation lights to the top of the bridge towers began on the Deer Isle-Sedgwick Bridge Monday, July 22.

Traffic will be reduced to one-lane traffic Monday through Friday from 7 a.m. to 5 p.m.

The work is meant to replace various parts on the bridge “to extend its lifespan and improve the overall condition,” said an MDOT press release.

Talbot said he expects the work to be fairly steady, even during inclement weather.