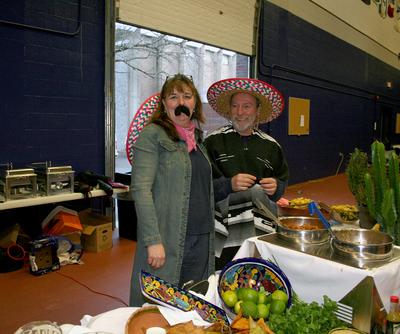 After five years of cooking, and more, at Bah’s Bakehouse, Mark and Kelly Sawyer are taking over. They open on March 4 as MarKel’s Bakehouse. Here, the cooking duo participated in MMA’s annual chili cook-off on February 2 and took home top honors in four categories.

“If everything works the way it’s supposed to—we’re opening March 4.”

Kelly Sawyer stands with husband Mark in the former Bah’s Bakehouse amid the later stages of minor renovation chaos.

The Sawyers—native Mainers both, with Mark from Falmouth and Kelly homegrown in Castine—will reopen the local eatery as MarKel’s Bakehouse. But they don’t foresee a lot of changes.

“It will be the same, but different,” said Kelly Sawyer. “There will only ever be one Bah.”

The culinary duo are responsible for bringing shepherd’s pie and lasagna to the bake house menu, to name just a couple.

Barbara Ann Hero—or Bah—Macomber opened and operated Bah’s for 22 years. Several years ago she added Stella’s Jazz Nocturnal, a restaurant and jazz club, in the building’s first floor. This will not reopen.

The Sawyers plan to use Stella’s for catered events, possibly adding a supper club or wine dinners, once or twice a month.

“If you’re going to eat an elephant, take small bites,” Kelly said. “It’s a lot to take on in the first year….We’re taking it one step at a time.”

One difference is that MarKel’s will only close for six weeks a year; Bah’s usually closed in October for the winter.

“[Bah’s] has been a hub for Castine—like the Variety,” said Kelly. “There’s people who come [back] 10 years later and ask ‘Do you still have those cookies?’ It’s that kind of thing that brings people back.”

As for Bah herself?