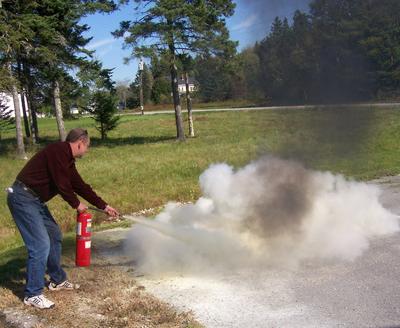 “I didn’t really know what to expect at first,” said Alex Schwez, a 16-year-old junior fire fighter with the Penobscot Fire Department. “But it does feel like I do everything a fire fighter would do.”

With around 10 “really active” members and 30 volunteers on the books, the Penobscot Fire Department is always looking for new volunteers of all ages, men and women. They held an open house on October 8 to help recruit new members and demonstrate the proper use of a fire extinguisher and equipment used in locating and fighting fires and rescue operations.

“You can’t go into a fire without a support group,” said Evans, who is in his 11th year as a volunteer fire fighter.

“They’re an incredible bonus to our department,” Evans said. “I can’t say enough good things about them.”

Within an hour into the open house, 24 people had signed their names up as interested in hearing more about volunteering for the department.

At over 80 years old, Fred Briehl is the oldest member, while Charlie Dean runs a close second, with 15 years as a volunteer in Penobscot under his belt, preceded by 18 years as a Brooksville volunteer fire fighter. Women volunteers “have our full encouragement,” Evans stressed.

The department averages about 50 calls per year, said Fire Chief Dennis Robertson, with three or four of those for structure fires.

The majority of calls are for removing fallen tree limbs from electrical wires, clearing trees from the road, boating and car accidents and missing persons.

The forestry rescue truck sees a lot of action. “Most people have a tendency to get hurt away from the road,” said Evans.

Two fire engines, an emergency rescue vehicle and the forestry rescue truck make up the emergency fleet. Additional equipment includes a “jaws of life” system, a thermo-imaging camera, and an air bag system used to lift vehicles in order to remove persons trapped beneath. Past use has seen the air bag system raise a wood-filled truck six inches off the road to rescue someone trapped beneath when a hydraulic jack holding up the truck had broken.

Besides the table of grilled burgers and hotdogs with all the fixings, cookies and punch, the most popular attraction of the open house was the fire extinguisher demonstration, with Evans assisting anyone who wanted to try putting out a diesel fuel fire.

Evans recommends placing an extinguisher at each building exit, to grab as you exit a building on fire. Once safely out of the building, “you can see if you can save the house,” he said.

Extinguishers are appropriately used on incipient fires, not ones with billowing black smoke.

“Calling us is always appropriate,” he said.

When using an extinguisher, remember PASS: Pull the pin, Aim, Squeeze the trigger, and Sweep the flames. Always aim for the base of the fire, Evans said.

The annual Hunters’ Breakfast will be held at the station on Saturday, October 29, from 4 to 8 a.m. 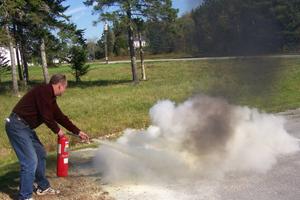 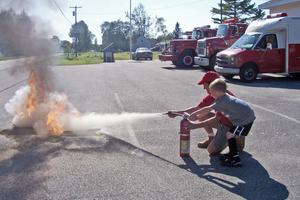 “This was my first time putting out a fire. It was very exciting,” said Rich Abate of Penobscot, after extinguishing a diesel fire at the Penobscot Fire Department open house.