Considered to be the perfect tree on a street because of its arching canopy and absence of low branches, elm trees no longer grace American streets as they once did.

Castine is one of the few remaining towns whose trees have survived Dutch elm disease, and the community has worked hard to keep them alive and healthy.

“For decades the town has managed its trees quite well,” said Jan Santerre, a horticulturist with the Maine Forest Service and director of Project Canopy.

Santerre led a tour of Castine’s historical elm trees on June 17. The event was sponsored by the University of Maine Cooperative Extension and organized by horticulturist Amy Witt through the Maine Tree Club.

A vicious September 2007 storm wreaked so much damage to Castine’s elm trees that the town reached out to the Maine Forest Service’s Project Canopy to fund a comprehensive inventory and management report of the more than 300 elm trees in on-neck Castine. “You have to know what you’ve got before you can determine what to do with it,” Santerre said.

Previously, Castine relied on Faurice Bowden, who, as Elm Tree Warden, provided over 35 years of expert tree advice and management to the town. At their June meeting, the town selectmen asked for official town recognition of Bowden’s service.

The September storm, called a “microburst,” knocked down 14 of the largest elms in town. Seven others eventually had to be cut down because of the damage they suffered.

The Castine Garden Club took on the task of measuring the elm trees still standing, and Santerre and the Maine Forest Service helped identify exactly what work needed to be done. In the spring of 2009, the town and Maine Maritime Academy began elm tree maintenance on the roughly 100 elm trees that were determined to need pruning.

Damage—not disease—was the reason for the removal of the beloved Post Office elm, which survived the microburst but then was hit by an April 2011 storm. Santerre noted that “for as many elms as [Castine] has, there’s not much disease.”

A main reason for the good health of the elms goes to the research of the University of Maine. A vaccine developed by Dr. Richard Campana in the 1970s to protect the trees from Dutch elm disease was tested on the Castine elms for several years. Santerre, calling the vaccine “an expensive management tool,” noted that the town no longer uses the vaccine, and the elm trees are doing very well.

Dutch elm disease was carried to the United States by bark beetles on a shipment of logs imported from the Netherlands by an Ohio furniture company. The disease eventually wiped out over 77 million American elm trees.

However, the Elm Tree Walk was held to celebrate the Castine trees, some of which are over 150 years old. “I’ve always admired the elm trees in Castine … and just wanted to know more,” said Castine resident Kay Bailey. Seven-year-old Lake Lindelof, who came out from Belfast with his mother, Tracey, can identify an elm tree. “It looks like a broccoli crown,” he said.

Assisted by Kevin Doran, natural science educator with the Maine Forest Service, Santerre first led 28 tree lovers from Maine to Minnesota to the town common, where they learned how to identify and measure the height of elm trees. Santerre demonstrated how trees are given “point values,” by measuring trunk circumference, height, and crown spread. The point value of a tree is used to determine its overall size.

Santerre started out small, measuring a Princeton American Elm that stood less than ten feet tall, one of nine elms that the Castine Tree Club planted just last week. The club has helped plant 30 elm trees in the last three years, and created an exhibit on the history of Castine’s elm trees now on display at the Castine Historical Society. The exhibit was part of the tour, and will stand all summer. It also includes pieces of the historic Post Office elm.

While the number of rings inside a tree trunk show the age of a tree, the width of each ring is based on rainfall. The more rain, the wider the ring. Castine Tree Club member Pat Mordecai estimates the Post Office elm was at least 150 years old, with a diameter of four feet.

Next, Santerre led the tour to elm tree #18, located on Court Street near Pleasant, now the largest elm tree in Maine. “Herbie,” located in Yarmouth, used to be Maine’s largest elm tree, with a point value of 384. Herbie was 217 years old when it was removed in January 2010 because of Dutch elm disease. The Court Street elm has a point value of 296. However, Mordecai thinks there is an even larger elm tree off-neck on Castine Road, just past Dunk’s Meadow.

The Maine Forest Service has been compiling a list of the largest known specimens of native and natural trees in the state since 1968.

“State champion big trees capture our imagination for their size and strength,” Santerre said. “They are symbols of all the good work that trees do for the quality of the environment and our quality of life.” 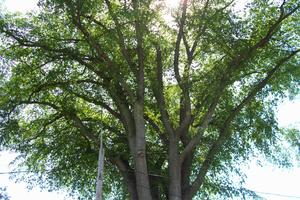 Elm tree #18, on Court Street near Pleasant, is listed as the largest elm tree in Maine. It stands 93 feet high, with a circumference of 15.5. feet and a crown of 87 feet. Elm lovers took a tour of Castine’s historical elm trees on June 17. 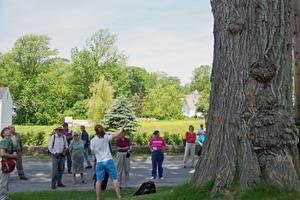