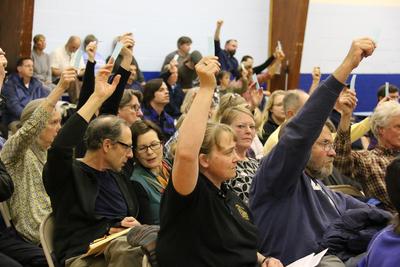 Voters at Penobscot’s annual Town Meeting on March 3 had a lot of decisions to make, spending over three hours voting on 20 school warrant articles and 60 municipal articles.

After hearing an appeal from head of GSA Tim Seeley, explanations from the school committee and statements of opposition and support from the public, Penobscot voted 54-34 in favor of GSA’s request.

“If you vote yes on this then what you are saying as a community is that you value the opportunities for education that GSA provides,” said School Committee member Charles Brenton, adding “if you vote yes on this, you’re saying: school committee, selectmen, go forward, work with GSA and try and solve this problem.”

Later in the school warrant, article S18 which asked the town to approve $55,000 from the school bus reserve account to purchase a new bus, ran aground after Chairman of the Selectmen Harold Hatch pointed out a major discrepancy in the actual amount held in reserve.

According to Hatch who referenced a conversation with the school auditor that morning, the amount held in reserve is only $25,000, meaning that the article sought to expend more than the reserve account contained.

Hurvitt responded that he was unaware of this, stating that he was under the impression from his conversations earlier in the year with the auditor that the reserve account contained $55,000.

Since the issue remained unresolved, Hatch made a motion to amend the article to raise $0 dollars.

“I don’t think legally we can spend money that’s not there,” he said.

The article was approved as amended.

According to Hurvitt, the money will eventually be used to purchase an 80 kw generator to power the school in case of emergency.

School Committee member Ed DeVito suggested that such a generator would be a boon for the town, which would be able to use the school as a place to gather in the event of a natural disaster or other catastrophe.

After discussion, the article passed.

A short break was held before voters reconvened to approve the municipal warrant.

Before the voting began, Hatch noted that several of the articles previously raised from taxation were instead raised from town revenues and surplus in this year’s budget in an effort to keep the property tax mill-rate down.

With fewer questions, the municipal warrant moved smoothly along.

An appeal from members of the Blue Hill Public Library for their annual request was heard before voters approved the full amount of $3,675.

Additionally, members of the public questioned the increased snow removal costs, which Hatch explained is a result of using more sand and salt than was budgeted for last year due to unpredictable conditions.

After discussion, voters approved $170,000 from excise tax to add to the snow removal reserve account.

Phillip Rapp received 88 votes in an uncontested race to serve another three-year term on the Penobscot Board of Selectmen.

William Hutchins received 89 votes in an uncontested race to serve another two-year term as road commissioner.

Charles Brenton and Anne Hayes-Grillo received 80 votes and 82 votes, respectively in uncontested races for another three-year term each on the Penobscot School Committee.

Sally Bridges received 93 votes in an uncontested race to serve another two-year term as town clerk.