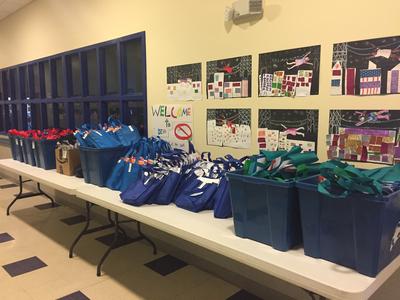 Assignments and home study materials are lined up for delivery at the Deer Isle-Stonington Elementary School.

by Anne Berleant and Leslie Landrigan

With the spread of COVID-19 across the United States and Maine, local schools have closed, as the state, local organizations and citizens come together to stem the spread of the coronavirus.

Union 93 and Union 76 schools will stay closed until April 27, superintendent’s announced on March 20, just days after an earlier decision to close schools until the end of March. New re-opening dates of April 27 soon followed from George Stevens Academy, and Blue Hill Harbor School will remain closed through April vacation. “But we do not have a resume date as we are carefully monitoring the CDC and DOE’s recommendations,” Principal Katie Truesdale communicated to parents.

Gov. Janet Mills’ Declaration of a State of Emergency on March 15 stops schools from providing classroom-based instruction to students in school but allows schools to remain open to authorized school staff.

Across public and private schools, both elementary and high school, work packets for students are available, either through pick up or drop off arrangements or a complete shift to online learning is underway.

“Each school is dealing with this differently,” Union 93 Superintendent Mark Hurvitt said March 16. “Some schools deliver, some [have] pick-up at the school.”

Public schools are working to provide breakfast and meals to students, too.

From Union 76 Superintendent Chris Elkington, came a March 16 memo noting, “We are moving into uncharted waters and our roll-out of many new SU76 driven options from food to learning won’t be perfect, but our staff is working hard to deliver the best options we can.”

Deer Isle-Stonington K-7 teachers have created two-week work packets, for students to work on at home, and high school students will use Google Classroom, he said.

But with at least a dozen Deer Isle-Stonington students without internet access, on March 12 the CSD 13 board authorized Elkington to accept smart phones that function as internet hot spots. The phones are free, and internet service will cost the CSD $750 a month for each set of 30 phones. Elkington estimated the school district will need 90 phones for teachers, students and ed techs to use during the school closure.

“We do not know when classes and activities will resume on campus, but it will not be before March 30,” reads a statement on GSA’s website. Head of School Tim Seeley added, by telephone, “We can do online learning as well as any school in the world.”

Bucksport and Ellsworth High Schools closed at the end of the Monday, March 16, school day, until April 27, and the Maine Principals’ Association has delayed the start of the spring sports season for schools until April 27.

Some local daycare centers are temporarily closing, including Golden Sun Childcare in Blue Hill and Sargentville, which closed March 17 until April 1.

The Bay School in Blue Hill closed March 13, and Explorations Learning Center in Deer Isle also is closed, until March 30, a date that may change.

“We’re figuring it out as we go,” teacher Torri Robbins said. Both private schools have implemented at-home learning for their students.

Maine Maritime Academy in Castine closed Wednesday, March 18, and will resume with remote learning on March 30, after initially just closing the campus to the public last week.

“Our plan had been to serve the academic needs of our students by conducting as much of the semester as possible here on campus. However, that plan and the goal of protecting the health of our community are no longer compatible,” President Bill Brennan wrote to the MMA community.

Director of College Relations Jennifer DeJoy noted via email, “We are continuing to monitor the situation and follow guidance issued by the CDC, Maine CDC, and national, state, and local officials regarding institutional response.”

While schools have included an end date for remote learning, updates are being posted regularly on school websites and Facebook pages, and parents and students are being notified of changes via email, too.

Regarding extending the closure to April 27, after the scheduled April spring vacation, Hurvitt said, “I am really hoping that this will be a realistic date, but we will see.”

Editor’s note: This online story was updated March 20, after our March 19 print edition, to reflect new opening dates for most schools.