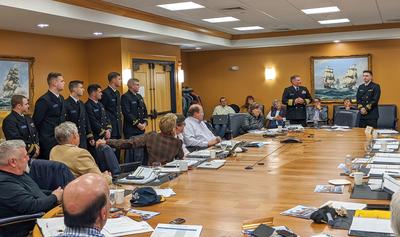 The Maine Maritime Academy Board of Trustees held its quarterly meeting February 27, where trustees heard the latest news on MMA’s investments, operating budget, enrollment and the status of the new waterfront facility planned for the former Verso paper mill in Bucksport.

They also heard some philosophizing on serving as a trustee from Chairman Earl Cianchette.

“About the time you learn where you can help the most, your term is up,” he joked, continuing that “supporting the institution and the president” is the best role the board can play for MMA. “We always have to be cheerleaders, that’s our job.”

With a high percentage of students remaining at MMA once they complete their first semester, tuition cost and scholarships play big roles in getting them here. As Cianchette noted, “If we can’t get ‘em here, we don’t have to worry about them staying.” An ongoing campaign has raised $18.3 million of its $20 million goal to fund scholarships, with the Advancement Committee gaining unanimous board approval of a slate of new and updated scholarships.

The board also approved the establishment of the Bowdoin Future Fund, to maintain the historical schooner for years to come.

“That does represent a lot of hard work,” President Bill Brennan said.

Finance Committee Chairman Miles Theeman predicted a “projected positive bottom line” of $1.1 million for this fiscal year, and a 2020-21 operating loss estimated at $1.3 million. That operating loss is “consistent with what we’ve done in past years,” Theeman said, of using “very conservative” revenue projections and “hope more comes in.”

In his report, Brennan noted the progress on the Bucksport waterfront facility, which is “moving in such a nice direction. We look forward to an official opening once the renovations are complete.” Training classes are already being held at the site.

A new “national security vessel” aka training vessel has been federally funded for MMA “and will hopefully be sailing up the Penobscot Bay in several years,” Brennan said. “It will greatly enhance MMA.”

In other news, a recent Women on the Waterfront forum drew a good turnout; a coastal and marine environmental science program is being developed, with approval by trustees scheduled for May; and marketing the online graduate program continues, with 14 students currently enrolled.

The trustees next meet on May 1, with commencement set for May 2.