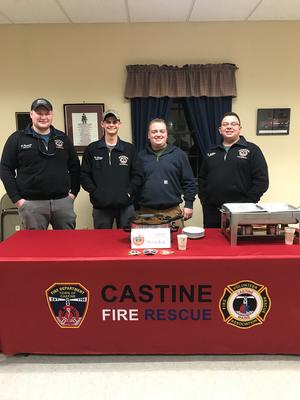 On Saturday, March 7, firefighters from the Penobscot Fire Department and the Castine Fire Department gathered to judge each other’s chili and chowder creations in a friendly fundraising competition.

The event was well attended, with a crowd of nearly 40 people showing up to taste the chowders and chilis while supporting their fire departments, said Castine firefighter Korey DeBoth.

This was the third annual cook off held by the Penobscot Fire Department, and the first one attended by firefighters from Castine.

“We currently have a refurbished plumbing van from the 1990s that has been our “First Out” vehicle for over a decade and has racked up many miles and hours of service,” she said, adding that since the Penobscot Fire Department is responsible for funding the replacement cost of this vehicle, most donations have been going to meet those fundraising goals.

According to Leclerc, whose scallop and crab seafood chowder won the chowder category, “Castine certainly brought the heat with the spiciest chili in the lineup this year.”

Leclerc stated that the Penobscot Fire Department is already planning for next year’s cook off, and hopes to eventually make it a peninsula-wide event with other fire departments and perhaps guest judges.