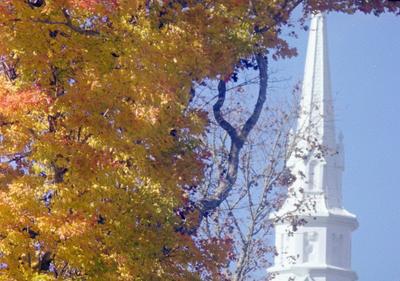 The Main Street Church in Castine and the fall colors of an elm complement each other in a still from Matt Shaw’s latest work, Saints of Circumstance.

On Saturday, January 25, an audience of around 40 people crowded into the cozy upstairs loft of The Cannery in South Penobscot for the premier of local filmmaker Matt Shaw’s latest creation, Saints of Circumstance.

Despite the soporific heat coming from the large wood stove, an excited murmur of expectation floated around the room. People nestled themselves amongst books, artwork and even what appeared to be a Roman amphora to see the culmination of Shaw’s year-long, poetic study honoring Castine’s famous elm trees and the efforts to maintain them.

A resident of Blue Hill, Shaw started making films while studying at College of the Atlantic where he received a bachelor’s degree, before moving to Chicago to pursue a Master of Fine Arts from the University of Illinois at Chicago.

Shaw regards “being able to go out in nature year round” as a major factor in his decision to return to Maine to continue his artistic practice. “It seems like people really care about where they live and by extension the community,” said Shaw, referring to the peninsula.

Saints of Circumstance marked Shaw’s fourth publicly screened work and the first to be shot entirely on 16mm film. “There’s some kind of luminosity to film,” said Shaw, “the image is alive in a way that it’s not in video.”

Shaw used multiple cameras during the making of Saints of Circumstance, one of which, an early ’30s Kodak, began to mechanically fail during several of the shots, making the image vibrate and sway. A classic Bolex 16mm camera was responsible for picking up the slack and shooting the majority of the footage, which was then digitally edited with help from Northeast Historic Film in Bucksport.

By his own estimation, Saints of Circumstance marks a new artistic course for Shaw, who sees his previous work as being more reliant on traditional narratives centered around people in a particular place. In this recent work however, the trees themselves drive the narrative, with people coming and going throughout the trees’ long lives.

“I wanted to show the trees across the seasons,” said Shaw, who spent many hours walking the streets of Castine and the surrounding area seeking out the giant elms. “It’s a very research oriented practice, simultaneous with observation.”

Shaw has recently been awarded a month-long fellowship at Arteles Creative Center in Finalnd, where he looks forward to continuing to use film as a medium to explore new ways of “thinking about textures and light.”

The Cannery in South Penobscot has been an important space for Shaw, who credits it with helping to “expand the year-round artistic community.” In addition to Shaw’s film, The Cannery also hosted a work by sound artist Steve Norton titled “snowfall.”

A list of future events can be found at cannerysouthpenobscot.org/calendar.html. 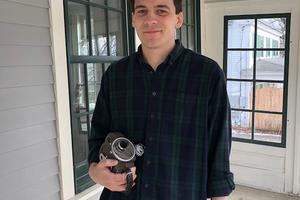 Local filmmaker Matt Shaw with his 16mm camera in hand enjoys a sunny morning on his porch in Blue Hill. 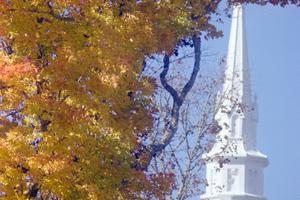 The Main Street Church in Castine and the fall colors of an elm complement each other in a still from Matt Shaw’s latest work, Saints of Circumstance.