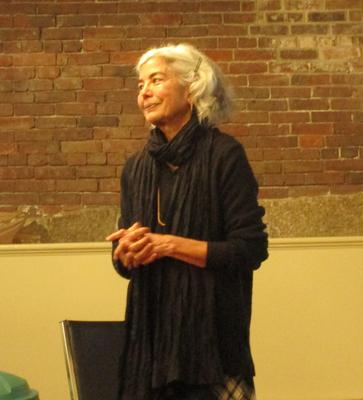 Sheila Kirby speaks about the history of votes for women at the Castine Historical Society.

The audience for the January 9 lecture on the history of votes for women at Castine Historical Society resembled leaders of the suffrage movement dating back to the mid 19th century.

Speaker Sheila Kirby filled in for Ann Luther who was unable to attend. Both women are active in the Maine League of Women Voters and a number of community issues relating to elections and voting.

Kirby delivered the hour and a half lecture with clearly projected slides in the chilly cellar “Mitchell Room” of the historical society’s Abbott School.

Although the Territory of Wyoming in 1869, and a number of western states gave women the right to vote in local elections, national suffrage for women did not become the law until 100 years ago—August 1920. Congress approve the amendment in June 1919, but ratification by the required number of states took more than a year.

According to Kirby, the 19th Amendment is worded exactly as written by Susan B. Anthony in 1878:

“The right of citizens of the United States to vote shall not be denied or abridged by the United States or by any State on account of sex. Congress shall have the power to enforce this article by appropriate legislation.”

Soon thereafter in 1923, Alice Paul proposed the ERA (Equal Rights Amendment) which, to date, has not been approved nationally. The ERA would extend protection for women and other gender groups beyond the ballot box to include all federal laws. Opposition claims the 14th Amendment covering race, religion, and national origin should include gender, and that the ERA is unnecessary. Nationally, the campaign to pass the ERA is currently active.

The Castine lecture brought out a few surprising, not always pleasant, aspects of the struggle for voting rights. Kirby noted that the movement in North America was influenced by native American women of the Iroquois Confederacy whose leadership and rights within their tribes included property as well as voting rights. Yet native Americans were and continue to belong to the list of groups facing racial discrimination that threatens their voting powers.

Although all U.S. citizen women technically gained voting rights 100 years ago, many communities continue to discourage a number of racial and ethnic groups from full participation in making and enforcing rules of democracy as currently defined, according to Kirby.

She also talked about abolitionist and temperance movements in and out of coalition with suffrage efforts. Many early suffragists were also avid abolitionists. Many also espoused temperance—prohibiting alcohol consumption.

Cooperation with the Women’s Christian Temperance Union was a tougher alliance. One of the best known suffragists Susan B. Anthony reportedly said no men would support votes for women who would take away their right to consume alcohol. But the Union’s examples of public demonstrations and commitment to beliefs served to inspire suffrage groups.

Many active in the suffrage movement brought stories of diversity. Suffragist Ernestine Rose faced derision because she was Jewish. The Grimke sisters grew up in a slave-holding family in South Carolina and emancipated their slaves when they moved north in 1836. Also supporting woman suffrage, they organized the National Woman’s Anti-Slavery Convention in New York, 1837.

While many labor unions supported women’s rights, some sided with industrial managers who feared that women voters would put an end to child labor, which they did.

The League of Women Voters, nationally and in Maine, plans a number of celebrations this 100th year of woman’s suffrage.

Many LWV members bring extensive backgrounds in business, science and humanities to their volunteer work. Sheila Nataraj Kirby, an active member of Maine LWV, was a senior economist at RAND, nonprofit think tank, for 30 years. She served as a Senior Fellow at NORC at the University of Chicago from 2012 to 2017. Her primary research fields were education and defense. She held a joint appointment as adjunct professor of economics and public policy at The George Washington University at the graduate level for 25 years. On the board of the Acadia Senior College she teaches courses in Behavioral Economics.

Ann Luther, originally scheduled to deliver the lecture, serves as treasurer of the League of Women Voters of Maine, having previously served as president and as co-president. She joined the League in 1998 when she retired as product manager at SEI Investments. A founder of the MDI Restorative Justice Program, 1999–2000, she was the 2013 recipient of the Baldwin Award from the ACLU of Maine for her work on voting rights and elections.

(Additional source for this story: Eminent Women of the Age, 1869, Being Narratives of the Lives and Deeds of the Most Prominent Women of the Present Generation, S.M. Betts & Co., Hartford, Conn.—specifically articles by Theodore Tilton and Elizabeth Cady Stanton.)