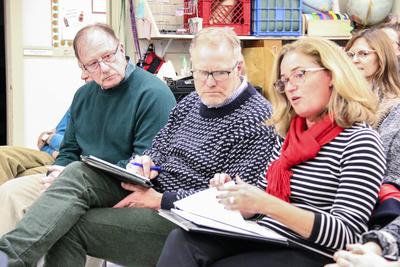 In the four weeks since independent school George Stevens Academy first presented its proposal to implement a $2,700 per student tuition increase over a three-year period, school boards, select boards, and GSA trustees and administration have held meetings, sent emails, and listened to parents, students and residents, all towards figuring out how to react to the request.

“There’s a lot of misinformation out there,” Head of School Tim Seeley said January 13.

In a recent talk with The Weekly Packet, Seeley said the school wants an open dialogue with its sending towns over the request: “We’ve been waiting for something concrete [to come] back and then we can think about it.”

GSA trustees have repeatedly and publicly said that if the funding gap, estimated at about $850,000, isn’t met, programs will have to be cut. The gap is a result of considerably less revenue from the school’s boarding program as fewer students from China apply. The boarding program was implemented in the mid-aughts as a way to create revenue, which it did for its first few years. When that bubble burst, it left GSA and other Maine town academies in financial trouble.

But school and town officials would like to see GSA tapping into fundraising and its endowment, which includes real estate, and reducing administration positions rather than asking the towns for more tuition.

“They still have this huge staff with a dwindling student population,” Blue Hill Chairman of Selectman Vaughn Leach said at a meeting with the Blue Hill School Board January 9.

And asking for the increase in December, when school budget work for the coming year is already underway, didn’t help GSA.

“I feel they came much too late and put us in a corner, and I think that was tactical,” Blue Hill Selectman Ellen Best said.

And while several weeks have passed before the request was publicly broached, emotions are still running high.

“There’s a lot of frustration, there’s a lot of anger,” Penobscot School Board member and Union 93 Chairman Jerry Markley said of comments made to him since GSA first announced the request, at a January 13 Penobscot board meeting.

GSA is asking for more money per student from its sending towns than the state-set tuition rate, which is its legal right. Seeley has compared the request to how, each year at town meeting citizens approve a warrant article that allows the town to pay more to educate its elementary school students than the state-set rate.

GSA’s sending towns include Blue Hill, Brooklin, Brooksville, Castine, Orland, Penobscot, Sedgwick and Surry, all towns where students can choose where to attend high school. With the exception of Orland, a majority of the students in the other towns choose GSA.

A January 17 scheduled meeting between selectmen from the seven towns that send students to GSA may help but, while open to the public, Blue Hill Chairman of Selectmen Vaughn Leach said it’s planned as a workshop for the selectmen, and public comments will be at the selectmen’s discretion.

Comparatively, towns paid $10,078 per student to Ellsworth , $9,889 to Bucksport, $11,093 to Deer Isle-Stonington and $11,148 to John Bapst, including the Insured Value Factor of 6 percent that independent schools may charge for facilities maintenance. GSA’s requested increase includes the IVF, raised to its legal limit of 10 percent of each tuition, plus more for tuition.

“Once you bite on year one, it’s a done deal,” Blue Hill parent Sean Dooley noted to selectmen and school board members. “By taking that first year bite, you bought into this three-year commitment.”

Superintendent Hurvitt and Union 76 Superintendent Chris Elkington are having attorneys draft a warrant article that they hope will appear on all town meeting ballots, but that is a select board decision. Some towns, like Blue Hill, are considering using a referendum vote, but for those holding early March town meetings, like Brooksville, Penobscot and Sedgwick, that ship has sailed because of the 60-day notice period required for a referendum.

Hurvitt said the warrant article should be ready for review next week.

While voters will decide whether to approve or deny GSA’s request—and it’s still unclear how the three-year plan to raise tuition will be handled when towns vote each year on the school budget—GSA won’t close, Seeley said. But if tuition remains permanently at the state-set rate, programs will be cut. Hurvitt cleared up one question at the Penobscot School Board meeting, that if a town denies the request, parents legally may pay the difference themselves.

For some selectmen and school boards, the focus is on how to move forward.

“The issue is not knowing how to proceed but yet having to put together a budget,” Brooklin School Board Chairman Mike Sealander said. “How do you budget for something with a lot of uncertainty?” His answer is for towns to use school carry-forward, or surplus, to cover the increase and to start high school tuition reserve accounts.

Castine School Board Chairman Kathy MacArthur suggested in a December meeting that GSA hold public information meetings in each town that would include GSA students speaking on their experiences.

Other officials are thinking differently.

“I think we should say no,” Blue Hill Selectman Ellen Best said. “Not forever but no this year…There has to be some way of being a little more equal on the playing field.”

Across the board, town and school officials have asked for more transparency in the school’s financial information, which has been more forthcoming, and a seat at the table, which the GSA board is discussing.

“People have felt for years that the GSA trustees have been a closed shop,” Markley said. “We’ve sent people over before, but when it came down to making a decision, you were shut out.” He said one citizen suggested disbanding the current board and replacing the seats with a school board member from each sending town.

For Seeley, it’s all about the education. “I would love for the conversation to move to how do we give a high quality high school education here, and a little away from questions of governance and timing [though] I don’t want to dismiss that.”

The January 17 workshop meeting between select boards will be held in the Blue Hill Town Hall first-floor conference room, starting at 1 p.m.