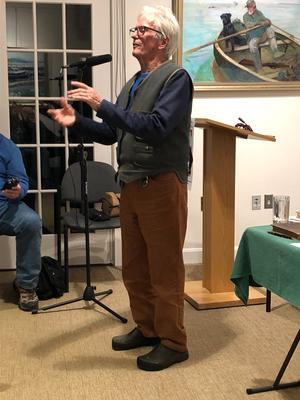 Organic farming expert, advocate and author Eliot Coleman shared his knowledge of how to avoid pests and grow gorgeous vegetables by creating healthy soil and plants that deter them.

Coleman is also “a father, a husband, a farmer, an instigator, a hell raiser,” said Rick Traub, who brought Coleman in for the first of three talks centered on informing citizens ahead of a pesticide ordinance voters will decide on at town meeting.

Coleman’s first step towards developing organic farming methods at his Harborside Four Season Farm was reading Rachel Carson’s Silent Spring, published in 1962, that informed the public-at-large of the past, present and future harms of widespread use of arsenic and lead-based pesticides.

“And it was used on everything,” Coleman told a near-capacity audience at Blue Hill Public Library in mid-December.

In his first year of organic farming, “I kept my eyes open,” he said. When cucumber beetles arrived, Coleman planted two fields the following year, one with manure and seaweed, and one without, and saw a big difference.

While harvesting carrots, a four-foot stretch in one row showed root maggots, with healthy carrots on either side. Coleman had pulled a boulder from that spot and filled with not “good” topsoil, providing ground-floor proof of how healthy soil protects plants from pests.

“Experiences like that were happening all the time,” in his early farming years, he said. Meanwhile, Four Season Farm produce became prized by local restaurants—and its baby carrots became a top trading item in school lunchrooms, he said.

By the 1970s, Coleman was tapped by the USDA, which heard he was taking groups to Europe to look at organic farms. Coleman took USDA officials along on a trip, describing one official sweeping his hands over crops to raise bugs and not finding them.

Coleman recalled the USDA official saying, “‘We can’t even do this well with pesticides.’ This was more than he could deal with.”

If plants are grown correctly in healthy soil, the pests won’t bother them, Coleman heard at a 1974 organic gardening conference in France. If they are not, “changes in internal composition and synthesis of protein from nitrogen stalls. All the free nitrogen in the plant’s tissues “becomes snack bar city for insects.”

To build and maintain healthy soil for plants to thrive only gets more science-based but, according to Coleman, is also supremely logical and not hard to implement.

But, while USDA officials have witnessed the successes of organic farming, one big barrier remains.

“The problem with organic farming is it only makes money for the farmer,” Coleman said.

While over one billion pounds of pesticides are used each year in U.S. agriculture, according to a 2009 paper published by the National Institute of Health, Four Season Farm produces 45 vegetable varieties without insects, and without using pesticides, “except for the potato beetle,” Coleman said. “But, we’ve been making progress….I think we’ll get there eventually.”