Castine
Originally published in Castine Patriot, February 6, 2020
Stunning sunsets are on the move 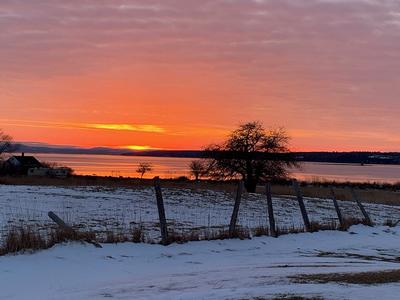 The sun is moving higher in the sky each day now. Here is a recent sunset over the Penobscot River in Castine.

“The sun has moved so far north already. It’s only been a month since the Solstice!”

Our curious couple is traveling south on the Castine Road, overlooking the Penobscot River as it meets the bay. The sun is saying a brilliant goodbye to the day as it sets over the Camden Hills.

“It was over the bay just last week; now it’s setting over Fort Point.”

The inclination of the Earth on its axis, generally stated to be 23.5° off straight up and down, is the cause of our seasons. As the Earth rotates on this axis, its orientation relative to the sun changes throughout the year. The result is greater solar radiation as the Northern Hemisphere faces the Sun in our summers, while less in the winter when the Southern Hemisphere receives it. Hence, we have distinct seasons in the temperate zones of the Earth.

“So many interesting and subtle changes are occurring within the relationship of the Sun and its planets that impact our weather, both short and long term.”

“They’re right at the center of the discussion about climate change and human impact.”

The inclination of the Earth actually changes over a defined cycle of 41,000 years. The variation between 22.2° and 24.5° is caused by the gravitational influence of the gas giant planets, mainly Jupiter. Currently, the inclination is approaching its minimum so, based on records of the last 2 million years, the northern and southern climates should be getting cooler.

“Variations in inclination would make a strong case, if that was all that was going on.”

“Yeah, it would, but it’s not that simple. That’s what’s so great, and frustrating, about science. Science is not done with sound bites. There’s always something else to think about.”

“That’s true. Like the ellipse of Earth’s orbit around the Sun. That’s usually cited at 93,000,000 miles, but it varies from 91.4 to 95.4 million miles. Lucky for us, the Earth is closer to the Sun in our summer. Except that changes over time.”

“As does the amount of the ellipse.”

Variation of eccentricity, as in the extent of the ellipse of the Earth’s orbit, has been found to follow a 100,000 year cycle. At some point, the Earth’s orbit actually becomes circular, all based on planetary influences. These changes impact the solar radiation making it to Earth, which is generally felt in the northern and southern latitudes.

“The impacts of all these changes on our climate have been recorded in ice-cores. Through all the data, the information presents a pretty clear picture.

“We would likely have a continental glacier forming in Labrador poised to head our way.”

“Life in Maine would be very different.”